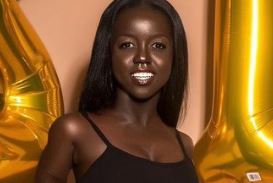 Tamera McLaughlin soared to fame after Rihanna’s Savage x Fenty named her as its brand ambassador. Her popularity doubled upon joining the cast of Little Women: Atlanta in season 6.

This Tamera McLaughlin wiki highlights truths about the model-turned-reality star such as her boyfriend, job, and height. Furthermore, it attempts to explore her family, net worth, and more.

Tamera McLaughlin turned 23 years of age in the Autumn of 2020. Meanwhile, he celebrates his birthday on 27th October.

Tamera McLaughlin is a native of Washington, D.C. Along with her brother Dre, she grew up there.

By her admission, Tamera and her brother, Dre were born 3 years apart. What’s more, their birthdays are 3 days apart. On his 19th birthday, she shared a photo from their childhood on Instagram and captioned it— “IT IS MY LITTLE BROTHER BDAY! I LOVE YOU LOL IM GONNA ALWAYS USE THIS PICTURE BECAUSE WE LOVE IT! Happy 19th bday little bro♥️♥️😘 I love you and miss you so much!”

From what we could tell, Dre is of normal height. So are their parents. Tamera’s father is Lee. Meanwhile, her mother occasionally appeared on her Instagram. Here’s an adorable photo of Tamera and her father.

Tamera’s parents don’t seem to be together. Back in 2019, she tweeted that her mother’s boyfriend proposed.

Tamera graduated from high school in June 2016. She then attended Trinity Washington University. Her first year in college was tough as she battled loneliness. Over time, she made friends and graduated in 2020 with flying colors.

Tamera McLaughlin was probably with some form of dwarfism. She should stand under 4 feet 5 inches in height. Meanwhile, the reality star weighed under 38 kilograms.

Sometimes Tamera wonders if she “was of average height would people treat me the same”. Other times, she warns her foes to never underestimate her ability to smack them.

As of 18th March 2021, Tamera entertained around 519 thousand followers on Instagram. Tamera is equally active on Twitter. Around the same time, she had sent over 64 thousand tweets while accumulating 20.3 thousand followers.

Moreover, Tamera seemed new on Facebook with a follower count of just 100s. Over on TikTok, she had more than 10 thousand followers.

To list out her job titles, Tamera McLaughlin is a TikTok star, model, social media influencer, and reality star. His net worth, meanwhile, was still under $500 thousand.

On Instagram and TikTok, Tamera uploads funny skits. Eventually, the very content got her a deal with Rihanna’s Savage x Fenty.

With her manager, Tamera had concocted a planned photo shoot with a Savage x Fenty lingerie set to gather the brand’s attention. To her pleasant surprise, the brand e-mailed her an offer. In Tamera’s words— “The week my ordered lingerie shipped, I got an email and it mentioned that they had somehow seen one of my viral videos and Fenty was interested in bringing me aboard as an ambassador. I CRIED IMMEDIATELY. Just that fast, it happened.”

Tamera told Buzzfeed News that as a brand new ambassador for the line she planned to bring “awareness to self-love, loving the skin you’re in and being courageous enough to go after the things your heart desires.”

The D.C.-native then added— “My role represents the notion of leaving doubt and fear that you might not make the cut out of the equation and just walking into your destiny.”

According to Tamera’s Instagram, Jasmine Thompson is her manager.

Looking at her social media posts, one could tell Tamera McLaughlin didn’t have a boyfriend in 2021. However, at one point in the past, she did have one.

Admittedly, Tamera prefers dating boys who are skinny and tall. In April 2013, she tweeted— “Tall skinny boys who ball and style is on point >>>”