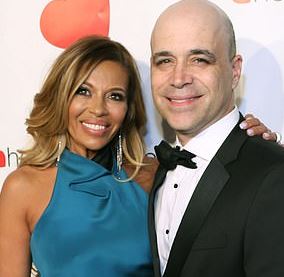 BravoTV’s reality star Dolores Catania has a new boyfriend she can’t stop showing off. She is dating an Ob-Gyn doctor David Principe from New Jersey. She first introduced him to her fans in season 9 of the Real Housewives of New Jersey.

David Principe celebrates his birthday every year on 26 June. He turned 56 years old in the Summer of 2020. Furthermore, he secured Cancer as his zodiac sign.

David L Principe hailed from his hometown Clifton, New Jersey. He lived in several places including Franklin Lakes in New Jersey, Chicago, and Oak Park in Illinois. However, he never shared details about his parents. Since he kept the public image away from info related to his family is quite a mystery.

Moving on, David Principe attended St. George’s University and graduated in the class of 1991. From 1991 t0 1992, he attended Sisters Charity Healthcare System to perform his Internship. Following his internship, he joined St. Joseph’s Hospital & Medical Center in 1992. He completed the residency in 1995.

As already established, secrecy is a must for David Principe. And this statement is supported by the fact that he doesn’t have any social media profiles. He doesn’t seem to be on any of the widely popular platforms including Twitter, Facebook, and Instagram.

While Dolores Catania stands tall at a height of 5 feet 7 inches, her boyfriend Dr. David Principe stood tall at the height of 5 feet 10 inches (1.77 meters). Whereas, he weighed almost 84 kilograms (185 lbs).

More From Us: Michael Manzo Wiki: Life Below Zero, Net Worth, Wife

David is also a fellow of the American College of Obstetricians and Gynecologists. Not only that, but he also earned several awards for his admirable contribution to the field of medicine. He has been honored with Top Doctors for Women’s Health, Top Doctors: New York Metro Area, and Inside Jersey Magazine Top Doctors.

More about his job: Dr. David’s expertise is sought during a high-risk pregnancy. On the medical website Vitals, his previous patients had nothing but words of admiration for his work.

And his passionate nature for his patients did pay him well. His exceptional service and 30+ years of contribution earned David Principe a total net worth of at least $5 million.

David Principe & Dolores Catania: Dating, How Did They Meet?

David Principe and Real Housewives star Dolores Catania first caught the attention of the public in 2017. So it was natural for people to enquire where they met each other for the first time.

As reported, they got linked together for the first time through a mutual friend Siggy Flicke, a relationship expert and RHONJ cast member. And the rest was history. They have been together since the Real Housewives of New Jersey season 7 reunion.

But David and fans of Dolores had differences that didn’t sit right. They were furious about the fact that David hasn’t proposed to her as of March 2021. They made their red carpet debut in August of 2019 after dating for 2 years during Healthcorps Gala hosted by Dr. and Lisa Oz.

While David was set to appear in Bravo’s Real Housewives of New Jersey after the premiere of the Season 11 of the show in February 2021.

A middle-aged gentleman with a steady job and attractive personality, there’s no way David Principe was never married before. But, he never shared even a single fragment of information before as a married man. Plus, he never gave info about his ex-wife and kids.

However, David does get along with Dolores Catania’s ex-husband and their kids. As Dolores remarked the two men get along like brothers. Plus, she also joked about the closeness of their relationship claiming that they were dating each other.

Even though fans anticipated Dolores and her ex-husband Frank Catania would reconcile and get back together eventually, a turn of the event came when David moved in with the couple. As reported by Distractify, David’s lease agreement ended on her other apartment and was building a new house.