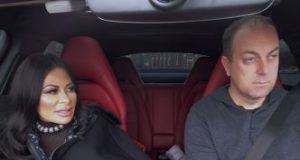 This Stuart Smith wiki attempts to uncover facts about Jen Shah’s assistant including his age, wife, and net worth. Similarly, uncover his family, height, and social media reach.

On 30th March 2021, the authorities arrested Stuart Smith and his boss, Jen Shah. They then charged the duo with conspiracy to commit wire fraud in connection with telemarketing and conspiracy to commit money laundering. Stuart and Jen were facing jail sentences of 30 years and 20 years for former and latter respectively.

According to the NYPD, Stuart and his boss had been a part of a fraudulent telemarketing scheme that began in 2012. The duo allegedly sold victims, 55 and above and without computers, fake online business services that failed to meet promised results.

In a press statement, Audrey Strauss, the Manhattan US Attorney, said— “Jennifer Shah, who portrays herself as a wealthy and successful businessperson on ‘reality television, and Stuart Smith, who is portrayed as Shah’s ‘first assistant,’ allegedly generated and sold ‘lead lists’ of innocent individuals for other members of their scheme to repeatedly scam.  In actual reality and as alleged, the so-called business opportunities pushed on the victims by Shah, Smith, and their co-conspirators were just fraudulent schemes, motivated by greed, to steal victims’ money.  Now, these defendants face time in prison for their alleged crimes.”

As of 31st March 2021, it was unclear if the arrests will appear on RHOSLC. That said, weeks earlier, Andy Cohen had revealed the filming had begun recently.

Because of his date of birth, Stuart was born a Pisces.

On his 43rd birthday, Jen Shah wrote a sweet message and uploaded it on Instagram. It read— “Some people come into your life for a reason…they are with you through the highs and lows, they are steadfast in their loyalty and love. There’s NO ONE ELSE LIKE YOU! HAPPY BIRTHDAY to my STUCHAINZ! 🎉 Thank you for being by my side from Day #1. I love you and am so grateful for your friendship, loyalty, sacrifice, support, and unconditional love. Have a SHAHMAZING Birthday! 🙌🏾♥️ #stuchainz #therealmvp”

As of 2021, Stuart Smith was residing in Lehi, Utah. Perhaps, it was also his hometown.

A 2018 census showed a 62% of Utah’s population was Mormons. Maybe, Stuart belonged to The Church of Jesus Christ of Latter-Day Saints.

What’s more, Stuart owns the facial and physical features of a Caucasian man. That said, he successfully kept his family info under lock and key.

Likewise, Stuart is a balding man with a strong nose. Both of the features give him a distinct look.

Stuart Smith operated on Instagram with the username @stuchainzofficial. However, he hadn’t put up a single post as of March 2021. Also, only 21 people followed him on the platform.

Although never confirmed, Stuart Smith has more than $1.5 million net worth.

Stuart, together with other employees including Crystal formed the notorious “Shah Squad”— a team tasked with looking after Jen’s empire.

An assistant working in Utah took home $40.6 thousand annually in salary. Given his experience, Stuart surely pocketed more than the given sum.

RHOSLC premiered its first episode in November 2020. Stuart enjoyed a recurring role in the franchise as Jen Shah’s assistant.

Because Stuart Smith kept his romantic life private, there wasn’t a way knowing if he had a wife or a girlfriend. Meanwhile, nothing on the internet suggested he was a gay man.