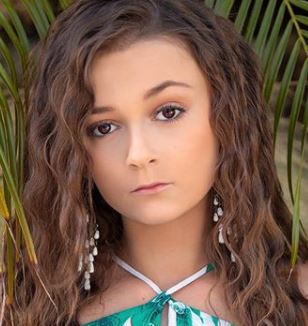 A name that popped among the few celebrities to gain stardom at an early age; Sophie Fergi is a child star blessed with a talent for acting and entertainment.

She first came to the limelight in 2018 after being cast for the second season of Brat TV’s web series Mani. Sophie appeared on four of the five seasons show portraying the “Goth Girl”.

Learn more about the child celebrity, Sophie Fergi as you tag along with this wiki-style article.

Corresponding to her birthday, Sophie is of Cancer zodiac.

As for her aspirations, Sophie mentioned that she just wanted to make people happy and inspire young people all over the world to follow their dreams.

Sophie Fergi was born and raised in Los Angeles, CA by her mom, Heather Nichole.

Reportedly, her parents have separated a long time ago.

While her biological dad remained anonymous, we know that her mother, Heather ran all of her social media.

In one of her Youtube videos, Sophie was taking a trip to visit her dad who lived in Texas. So, it might be that the father-daughter has reconnected.

As for her siblings, Sophie seemed like the only child.

Talking about her childhood, Sophie was always an acting bug. She made her first appearance as a guest actor in the film Away We Stay while she was just 3 years old.

And as she turned 10, it was her mother’s friend who encouraged her to start working as a background actor. Fast forward to 2020, Sophie already established herself as an actress.

Furthermore, Sophie was always supported by her mom and uncle. They were constantly featured over her Youtube.

Sophie is a pretty lady who puts on a bratty look. However, it might be her eyes and slightly protruded upper incisors tooth that give her the appearance.

As of September 2020, Sophie flaunted a sunning 1.9M followers over Instagram @sophiefergi and 1.5M followers on TikTok @soph1efergi.

While we can credit most of her earning to her Youtube and Movies/Shows, Sophie had other ways of income too.

Sophie was on Cameo @sophiefergi where could request for $95 and chat for $4.99.

Also, she sold her merch at “bonfire.com” which mostly featured pullover Hoodie of different colors.

As of 2020, Sophie Fergi was openly in a relationship with the young American actor Jentzen Ramirez.

Together they were called “Jophie”. 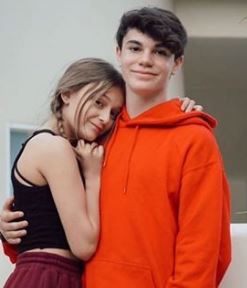 It wasn’t mentioned when the duo exactly started dating. However, it seemed like Sophie and Jentzen were dating for quite some time.

Also, Sophie mostly referred to Jentzen as her crush.

As comedic as she is, Sophie made a few videos where she captioned like “Copying my Crush” or “Asking my Crush to be my Boyfriend”; only to reveal at the end that her “Crush” was Jentzen.

Trivia: Sophie Fergi is a year younger than her boyfriend, Jentzen Ramirez.

Who Is Sophie Fergi Ex?

Sophie Fergi’s ex-boyfriend is Jentzen Ramirez. However, that was just a joke.

In a Q&A video, published May 15, 2020,  Sophie shared that she and her boyfriend, Jensen had broken up. The reason being; Jensen had signed another deal and it “kind of came in between their relationship”.

But as the video proceeded, it was revealed that was just a joke.

Furthermore, on July 31, 2020,  Sophie gave her fans another heart attack by uploading a video featuring Jentzen titled  “SAYING GOODBYE TO MY BOYFRIEND”.

And this time too, fans were misled; Sophie was saying “goodbye” to her boyfriend just for a bit as she went to visit her dad.