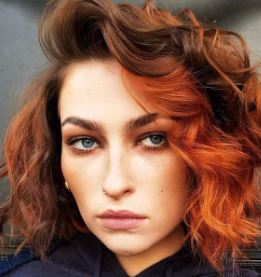 BBC Three’s Glow Up season 3 has come to an end; undoubtedly the winner is Sophie Baverstock. After her victory, Sophie shared, “I just wanted to show you can look pretty — just also a little bit weird,” and also went on to talk about how her autism has helped her.

But what about her private life? Who was she dating at the time? Learn all about it by the end of this Sophie Baverstock wiki.

As for her birthday, although we couldn’t find the exact date, it was shared that she was born in the summer.

Some stars aren’t that open about their parents and Sophie Baverstock was one of them. But, although she kept their names private, Sophie couldn’t stop herself from sharing their pictures on IG.

On Dec 2, 2019, Sophie posted a picture of her mother and her sister, captioned “(female gender symbol)”. Before that, Sophie’s mother also appeared once over IG captioned, “Mum at my age now or @cbavvv ?¿?”

Digging around a little, we found that her mother lived in Suffolk, UK, and was fond of gardening.

As for Sophie’s sister Caitlin Baverstock, she is a fashion designer based in London. The owner of an eponymous store, Caitlin claimed her designs to “breathe a new life of modernity into a vintage aesthetic.” Her works then combined streamlined tailored silhouettes and meticulous handcraft (including embroidery, leather embellishment, and illustration).

Trivia: Caitlin graduated from the London College of Fashion in July 2019, wearing her own collection; and Sophie was there to witness it.

Sophie Baverstock stands tall at a height of under 5 feet 7 inches (170 cm).

Mentioning her distinct features, Sophie has a triangular face with a chiseled jawline. Also, you might have missed it but she often wears a nose piercing.

Sophie Baverstock On Glow Up

Sophie Baverstock was already a winner of Glow Up before she actually won the show.  From the moment, Sophie presented her first work on ep 1 — representing the social phenomenon of ‘masking’, which involved talking about women with autism — she had fans commending her. Moreover, the TV editor Emily Baker also mentioned that Sophie was her favorite.

In the next ep, Sophie then represented her feminist upbringing špainting colors of the suffragette flag, paying homage to her Irish heritage.

Then came the 3rd ep, where she went on to create a look based on her inspiration artist, Francis Bacon.

For the 4th and 5th ep, she represented westernized beauty standards and an “out of this world” piece respectively.

Other participants of Glow Up season 3  who made it to the finale were Craig and Dolli.

Sophie Baverstock garnered a net worth of under $100 thousand as of 2021.

Just in case you want to know, an average makeup artist in London made around £21 thousand per annum.

An autistic child, Sophie always struggled with academic subjects in school. But, at home, she loved watching horror and science-fiction movies. Thus, she started self-learning some makeup skills, and slowly got better at it.

Before coming to Glow Up, Sophie never shared her autism with anyone outside the family. Moreover, keeping it a secret throughout the competition took everyone by surprise.

But all’s well that ends. She received “good responses” after the revelation and many people even opened up about themself after watching her. “People with autism are still quite a hidden group in society,” Sophie said.

In light of her education, Sophie is an Art Design student who received her UAL Foundation Degree in 2017. Then, she went on to study “Makeup for Media and Performance” at the Arts University Bournemouth in 2018 where she especially trained in Special effects. She was all set to graduate in July 2021.

Trivia: Sophie was diagnosed with autism at 17.

Expectedly, her posts were filled with her makeup works.

A beauty with talent, it is hard for anyone not to fall for Sophie Baverstock. But does she already have a boyfriend? As of 2021, Sophie had yet to confess but she was rumored to be dating the Stand-up Comedian, Isaac H.P.

Over Sophie’s IG, we could often see the duo together, and they did seem to be very close.

However, let us not jump to conclusions as the two can just be close friends.