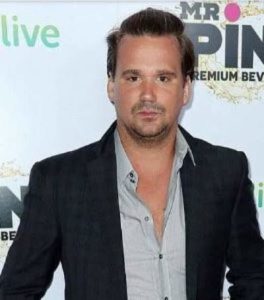 Most of us remember Sean Stewart from Sons of Hollywood an American reality show, also starring Randy Spelling and agent David Weintraub.

The show, with one season containing 13 episodes, aired circa April 2007 and followed the trio of former pampered Hollywood youth as they try to make it big in Hollywood.

After a long time, Sean came under the spotlight, once again trying to impress the reality television audience. He was set to appear on the MTV reality series, The Hills: New Beginnings thanks to his romantic relationship with “The Hills” original cast Audrina Patridge.

Here’s everything you need to know about him and the romance.

Sean was born as ‘Sean Roderick Stewart’ on September 1, 1980, in Holmby Hills, California.

He turned 40 years old in September this year. Also, his birthday makes him a Virgo.

Sean Stewart is the son of music legend Rod Stewart and his first wife, Alana Stewart.

His father is a British rock and pop singer and songwriter and one of the best-selling music artists of all time having sold 250 million and records worldwide.

Besides the fame for his distinctive raspy singing voice, he is known for his affairs with women and has eight children, by five mothers. 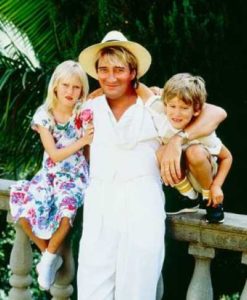 One of Sean Stewart’s childhood memories with sister and father (PIC: Sean’s IG)

Kimberly is an American socialite, television personality, model, and fashion designer, who gave had her first child, a daughter, with Oscar-winning actor Benicio Del Toro.

Meanwhile, Sean’s mother, Alana, who is an American actress and former model herself, was married to his father from 1979 until 1984. But for some reason, she retained her ex-husband’s surname.

He has naturally blonde hair and often since the past he cut his hair into a bob and pushed back; the messy fringe giving it definition and a natural style.

Sean Stewart is on Instagram and with 83.3k followers (until 26th November in 2020). Proud of his accomplishments, he writes “Entrepreneur taking over the world!!!!! Royalty 👑” on the social media bio.

Also on Twitter, the Los Angeles, California living enjoyed nearly 3.5K followers. Meanwhile, on the page, he described himself as an entrepreneur and a “proud uncle”.

Sean Stewart, according to his IMBD page, is a songwriter, musician, and model.

He co-wrote and sang the song “In Crowd”, the featured theme song in Sons of Hollywood. He is also credited as a producer for the series.

All thanks to his parents, he was exposed to the inner workings of the music business and entertainment world at an early age.

He reportedly operated a record label, was hard at work on his music career, and tried his hand at launching a fashion line.

As a model, he has also been featured in runway shows for labels including Nico & Adrian and Rock & Republic.

This way, Sean Stewart is the owner of more than $10 million net worth and no doubt is entitled to his father’s $300 million.

Sean and his father were ordered to appear in Palm Beach County court in February 2020, after witnesses told police that Sean had shoved the guard, and Rod had punched him in the chest. But they both had continued claiming of no wrongdoing.

We are well aware of the fact that before this incident, Sean served time in jail for fighting, and has faced many accusations of assaulting people at parties and likewise events.

Sometime in the past, he also opened up about his addiction to heroin and prescription drugs.

Sean Stewart started dating Audrina Patridge in 2020, and thus Sean has made his way onto the show The Hills: New Beginnings.

Audrina is a television personality, television presenter, actress, and model who gained popularity as the of The Hills. The show first chronicled the personal and professional lives of Audrina and her friends Lauren Conrad, Heidi Montag, and Whitney Port, from 2006 to 2010. Then in 2018, MTV announced a reboot of The Hills i.e. The Hills: New Beginnings. The first season premiered in June 2019 and the second season is on its way. Last heard, its production began in November 2020 with COVID-19 safety protocols.

In the meantime, Audrina and Sean, who met through mutual friends Heidi Montag and Spencer Pratt, have already filmed episodes together.

Just like his father, Sean went out with fair shares of girlfriends in the past.

He notably dated former Real Housewives of Beverly Hills star and businesswoman Adrienne Maloof from December 2012 and March 2013. She then moved on with a much younger Jacob Busch.

Also before, at a different point in the timeline, Sean was linked with Chantel Dreesen, Jasmine Waltz, Caleigh Peters, Erin Naas, and actress Katherine LaNasa.