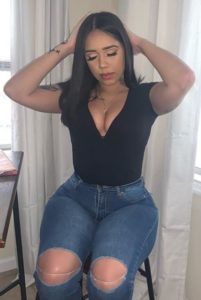 Who Is Sara Molina? 6ix9ine, Daughter

Sara Molina gained prominence as a former girlfriend and baby mama of rapper Tekashi 6ix9ine — real name Daniel Hernandez. Growing up in Brooklyn, the couple met each other through a mutual friend in 2012.

Both sixteen at the time, the Gooba rapper reached out to her on Facebook, and soon after the couple started dating. Two years into dating, Sara moved in with Daniel in a railroad-style apartment with his mother.

The move-in arrangement ended after Sara moved back with her parents at the age of 19. At the time, Sara was pregnant with Daniel’s kid. Though Sara moved frequented her visit to the rapper’s house, she decided not to date the rapper anymore.

Plus, 6ix9ine’s thriving career as a rapper had him shoot videos which made Sara very uncomfortable.

Sara discovered her pregnancy when the rapper was arrested for creating an inappropriate video of a 13-year-old girl having sex with an adult man. She kept the news a secret from her dearest and nearest.

The pair’s daughter Saraiyah was born in 2015.

Even after having a child together, Sara’s relationship with 6ix9ine soured eventually. She and her mother accused the rapper of splurging on his new girlfriend Jade Eshete while failing to pay child support for their daughter.

But on the contrary, a rumor surfaced on the internet of Sara not letting the rapper to get in touch with his daughter.

Slamming down the accusations, Sara noted that the rapper and his daughter spoke while he was doing time. In mid-December of 2019, 6ix9ine was sentenced for two years as the rapper pleaded guilty to nine charges.

However, after his release due to the COVID-19 pandemic, he didn’t reach out to Saraiyah.

While Sara accused Tekashi of cheating on her with over 70 women, TROLLZ hitmaker reciprocated with a claim that she slept with his former manager Kifano “Shotti” Jordan.

As of the summer of 2020, Sara Molina was rumored to be dating rapper Rich The Kid. The rumor surfaced after Rich posted a video of him picking Sara up in his blue Lambo.

As per the famous birthday, Sara Molina was born on 26 November 1996. She turned 23 years old while celebrating her birthday in 2019.

As for her zodiac sign, she is a Sagittarius as per her date of birth.

Sara Molina was born to her father Luis Rodrigues and her mother Irene Rodrigues. Her parents raised her in Brooklyn, New York where she met her rapper ex-boyfriend Tekashi 6ix9ine.

Other than that, no further information on her parents has been shared. Moreover, she has an elder sibling, her sister Baddie Gi. She and her sister hailed Latino-American ethnicity which they inherited from their parents.

Getting into her academic milestones, she attended Bushwick Community High School and graduated from the same. Following that, she went on to join the High School of Arts and Technology.

A beauty on flesh, Sara stands at a moderate height of 5 feet 3 inches while weighing 59 kilograms (130 lbs). Moreover, she doesn’t shy away from flaunting her measurements of 37-27-39 on her Instagram.

More on her bodily features, she inked a few tattoos on her body parts. Additionally, many claimed of her getting plastic surgery, a lip-filler, and buttock implants in particular.

With Sara’s association with 6ix9ine, her social media reach sky-rocketed over the years. Her Instagram flaunted a total of 454k followers at the time of this writing. Likewise, her Twitter account had 4078 followers at the same time.

Though occasionally active, Sara’s Facebook account boasted a total of 1725 followers. Yet she never posted on the plant since its start in 2017.

After Sara met Daniel, she also worked in a Deli with her ex-boyfriend. Following that, no details on her job have been officially announced. But despite a closed profile, she is out creating a career as a social media star and an internet celebrity.

Her burgeoning social media following helped her land endorsements with several products. As of June 2020, she bagged an attractive net worth of $380,000.

To be the witness of a family struggling to be with each other has never been a pretty look. And if the same...