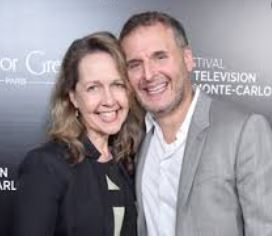 Do you remember Monica Horan from the classic comedy series, Everybody Loves Raymond? She played the role of Amy MacDougall Barone, Robert’s on-and-off girlfriend, and eventual wife. And though she wasn’t part of the original cast, her popularity was second to none.

Also, if that doesn’t ring a bell, know her as the wife to the writer and producer, Phil Rosenthal. In October 2020, Phil’s popular show Somebody Feed Phil season 4 was on the way, and it was hard not to recall his wife as he reminisced his wedding day over the trailer.

So here we are bringing you the inside info about Phil Rosenthal’s wife, Monica Horan over this wiki.

Also, her birthday lies just 2 days after that of Phil’s, which makes Monica and Phil of the same zodiac sign, Aquarius.

With the full name, “Monica Louise Horan”, she was born to parents: Robert J. Horan and Selma Spencer. She was raised in her hometown Darby, Pennsylvania, and recalled her neighborhood to be a “racist” one.

Monica’s father worked at an Automobile Club in Philadelphia and one day decided to invite a “black man to their home”. As the man arrived at their house, he offered to come in through the back door so their family “wouldn’t have any problems.” But her dad insisted he come in through the front door.

It seemed that a cross was burned on the lawn of the first black family that had moved in a block away which instilled fear in the “black man”.

Monica’s father was a great man. Unfortunately, he passed away on June 2, 2009.

As for her siblings, Monica has a brother named Stephen and two sisters named Rosenthal and Jenifer.

As of October 2020, Monica entertained 13.4K followers over Instagram @monicahoranrosenthal.

Strangely, she had decided not to play any movies as of 2020.

In light of her education, Monica attended Archbishop Prendergast Catholic High School for Girls and later graduated from Hofstra University in 1984 with a degree in theater performance.

Trivia: she worked as a telephone sales operator for Telecharge in New York in the mid-1980s.

Monica Horan first met Phil Rosenthal while they were studying at Hofstra University. And after years of dating, the duo got married on April 22, 1990, in Drexel Hill, PA.

Also, since Phil was from a Jewish family, Monica had to convert to Judaism before marrying him.

On their 29th marriage anniversary, Monica took it to Instagram to share a picture of their wedding and their wedding card. Over the caption, she was grateful for “Bob, Selma, Max, and Helen” for the “great wedding” and extended her thanks to Phil “for every day that’s followed!”.

Little info on Phil Rosenthal: He is a writer and producer, popular for The Simpsons Movie (2007), and Coach (1989). Also, he co-wrote and produced, Everybody Loves Raymond (1996); where he included his private life matters.

Being a part of Everybody Loves Raymond, Monica confessed that it was unsettling to see how her “private marital moments” were part of the script in the show.