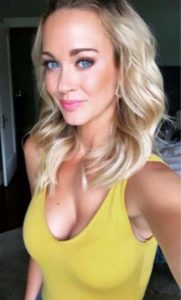 The first major disappointment in the life of MMA Analyst Laura (Marcusse) Sanko was her early divorce that occurred not long after college. To her, it then felt like a major failure, for someone who grew up in a religious family and had been successful in most other things.

However, it was the very frustration and stress, that later served as her motivation. Laura rejoined a gym, worked out regularly, and on a certain day, she was spotted by a well-known Kansas City MMA fighter, Rob Kimmons. She asked him if he could help her enter MMA training. Then, after on-and-off MMA training, and much commitment later she moved back to Kansas City, after a short stay in New York, in mid-2009.  And she found herself training under coaches Jason Krause, Brian Davidson, Austen Ford, and Tim Elliot, who encouraged her to go beyond training take on amateur fights. By the time she completed five amateur fights, she was ready to be a professional fighter.

So, if you may like to know her further, there is indeed much more to her, apart from her early years’ struggles.

Laura Sanko grew up celebrating her birthday every year on the 7th of December. So, one can say her zodiac sign is Saggitarius.

Laura Sanko was born in Illinois but when she was seven, her family moved to Kansas City after her father got a new job. Her father is a well-known economic development executive.

At the time, young Laura already had a budding love for karate, basically, because she wanted to be Daniel LaRusso from “The Karate Kid.”

She was lucky as her parents encouraged her in all of her endeavors: school, piano, and horses. Even her older sibling (brother) Steve was very supportive.

For education, she accomplished a degree in BBA with an Entrepreneurship/Entrepreneurial Studies major from William Jewell College in 2005.

It seemed, naturally her eyes are of beautiful blue color and her hair is golden-blonde.

Laura Sanko contributes some of her free time to promoting various healthcare and wellness-related brands on Instagram where she boasted 128k followers (until 27th August 2020).

And so in the participation of her thousands of fans, she drew more attention to brands: DirectHemp.com, an online retailer distributing products containing hemp and CBD, DrinkHRW, a brand promoting various dietary supplements such as hydrogen tablets, and Pure Spectrum CBD, a natural sleep aid.

Sometime later, after winning multiple matches as an amateur, Laura Sanko found out about her pregnancy.

At that point, she had signed a multi-fight deal with Invicta as an amateur and her fighting career was gaining significant success.

However, Laura chose to retire, and shortly she was instead offered a job outside the ring as a reporter for the Invicta FC. Since then she continued interviewing fighters before and after their fights. Not to mention, she is an integral part of the UFC’s social media team.

Even after retirement, Laura kept training regularly. And, today, as the most recognized faces in the current MMA scene, she also hosts the Aussie & Fancy Breakdown with fighter Megan Anderson.

In the meantime, the figure to Laura Sanko’s net worth hovered around $700 thousand. There is no doubt her fortune must have seen significant growth in every other successive year.

When it comes to her personal life affairs, Laura Sanko is not very communicative. Therefore, the in-depth information regarding her married life and her spouse is unavailable. (Yes, Laura Sanko is a married woman!)

However, after an elaborate digging, we came to know that Laura Sanko has been in a committed relationship with a fellow entrepreneur Nathan Sanko.

They were married at some point in 2012 after meeting for the first time in 2006.

On 7th September 2017, possibly their fifth wedding anniversary, Laura wrote on her Instagram:

Laura and Nathan also have been parents to their only son, Burke. He was born in December 2013. The older child was not seen anywhere in the media or public, as of the time of this writing. By then, not even his personal preferences or future ambitions were heard-of.

Maybe that is just the part of parenting Laura and her husband depend on, to raise their kid.

Besides sharing their duties while parenting, Laura and Nathan also share a similar interest in everything-business related. They both have a successful entrepreneurial spirit in them.

Nathan, her partner, according to his Linkedin profile, is an entrepreneur who founded one of his first firms, Back 2 Basics of Indiana, LLC, in 1997. For eight years, since the date, he oversaw the operations of the company, which aimed to recycle the organic fraction of residential waste collected in the City of Chicago, Ill.

And the year of 2011, saw him found a new venture, No Limit Safety, LLC. He became the CEO of the company, manufacturing/specializing golf cartwheels, sometimes around the corner.

Before Nathan, Laura was once married and divorced. Her first marriage functioned briefly for six months.

As UFC legend Frank Mir’s daughter Isabella Mir was making her MMA debut as an amateur fighter, the...

Tamara Alves is an engineer and a business owner. But more than her career, Tamara was popular for dating the...