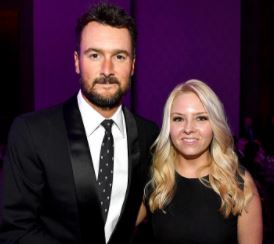 Did you listen to the amazing rendition of the National Anthem at Super Bowl 2021? It was performed by her husband Eric and Jazmine Sullivan. The unifying performance of The Star-Spangled Banner was praised throughout the internet, and the limelight Eric stood upon spilled a little onto his wife Katherine.

So, here we are easing your curiosity about Eric Church’s wife through this wiki.

Katherine Blasingame was born on February 28, 1979. That made her 41 years of age as her husband performed the national anthem at Super Bowl 2021.

Corresponding to her birthday, Katherine is of Pisces zodiac.

Katherine Blasingame resided in Nashville, TN. Before moving there, she lived in Adamsville, TN, which could be her hometown.

Some of Katherine’s family members include – Margaret Blasingame and Benard Blasingame.

Reportedly, her ethnicity is Caucasian, and her religion is Christianity.

Like Eric, Katherine Blasingame was in the music industry as well. She worked in music publishing and loved her job as a writer. Moreover, Katherine stepped into the music business career well before Eric did.

According to Eric, he was glad that Katherine was in the same field as him. Being a publisher and well-known face in the industry, Eric would bounce songs off of her. What’s more, was that Katherine knew to be kind of that sounding board of what Eric should cut and what he shouldn’t. He shared,

“So, she’s one of those in the inner circle that I run a lot of stuff by.”

Since the duo worked hand-in-hand, Katherine’s net worth was shot to over $2 million by 2021; which is nowhere near to that of Eric’s i.e. $14 million. Just in case you are curious, a music publisher’s salary was approximately $54,000 annually.

As for Katherine Blasingame’s Linkedin profile, not much was shared.

Trivia: Katherine and Eric created a charity together called “The Chief Cares Fund” in 2013. It served “underprivileged families and children throughout Tennessee and Eric’s home state of North Carolina.” Also, it provided international aid to countries like Nepal and Haiti.

Katherine Blasingame first met Eric Church through work — she was trying to hook Eric to write with one of her writers that she represented.

Reportedly, the two started dating before 2007. Over a year later, they then tied the knot on January 8, 2008, at the Westglow Spa & Resort in Blowing Rock, N.C. They had long decided that the ideal spot for their wedding would be “up in the North Carolina mountains, with just family around.”

Moreover, not only did they find the perfect spot to get wed, but also Eric added a little surprise to the ceremony. He blew Katherine away with the song he wrote for her “You Make It Look So Easy,” which was also one of the hit tracks on his Carolina record.

“At the wedding is the first time Katherine really heard the whole thing. She cried. Everybody cried.”

As of 2021, the duo was married for over 13 years. Church shared that he loved Katherine for the way she loved him. Confessing that he was “hard to love”, he credited Katherine for loving him “despite those things.” His definition of “true love” was — “when you love a person despite all their fallibilities.”