Food Network’s Chopped turned the heat up by launching its spin-offs Chopped Next Gen in 2021, and as always young chefs were competing in the culinary arena for the $10,000 grand prize. But among them, a returning participant Jay Abrams seemed like an interesting persona you might want to watch out for.

So, let’s delve into his world through this Jay Abrams Wiki.

Jay Abrams first appeared in the reality cooking contest back in the 2016 series of Chopped: Beat Bobby Flay: Part 1, and reportedly “made it to the end of the champions round.”

Now, as of July 2021, Jay was all set to compete against 11 other contestants; one of which will face off against Bobby Flay in the finale. The winner will take home a $10,000 grand prize.

As per his birthday, Jay is of the Virgo zodiac.

Jay Abrams might love cooking but what he loved, even more, was cooking for his family. In fact, Jay started trying to cook for them ever since he was a child. He recalled that he used to wait for his parents to finish cleaning the kitchen then he would go and “destroy it with some weird creation.”

Mentioning his siblings, Jay has two beautiful sisters whom he loved “unconditionally”.  His elder sister Kate lived in Boulder, Colorado with her two lovely kids.

As for Jay’s parents, his dad who looked a lot like him has appeared a few times over his socials. Find him over IG @drpapa11.

His mother remained a mystery to us.

Trivia: Jay was very close to his paternal grandfather who was alive and well before 2013.

His distinct features include — brown eyes and a bald head. Also, he has tattoos over his arms and chest.

As of July 2021, Jay entertained 2.5K followers over his Instagram @jbrams303. Most of his posts then featured amazing pictures from his travels, and obviously his culinary skills. Also, from time to time he kept refreshing the memories of his late dog Ziggi who passed away in August 2013.

Born in Vancouver but raised in Denver, Jay would run around telling everyone that he wanted to be a “chief” when he was young. So, at the age of 15, he finally took his first step working as a butcher assistant, and slowly worked his way up the ranks.

He even cooked all through his time at Westen State Colorado University (2001 to 2004) and later academically pursued culinary at Le Cordon Bleu College of Culinary Art, Poland (2005 to 2006).

Then in 2009, Jay joined Brix Restaurant and Gardens as a sous chef and worked there for over 2 years. Since then, he has worked with various companies such as Trace Restaurant, Presidio Social Club, Bi-Rite Catering and Events, and Off the Grid.

As of 2021, Jay was working as an executive chef at Compass Group USA in Mountain View, CA.

Jay Abrams wasn’t married before appearing on Chopped in 2021, but he already had chosen his future wife then. Her name is Denise and went by the name “@duhhniece” over IG.

The two were together at least since 2017, and have appeared together multiple times over Jay’s IG.

According to Jay, Denise was his “life, best friend, partner, love and family” and he was “one lucky boy” to have found her. Well, we might as well say that she was Jay’s everything.

Jay recalled, on their first date, they “cuddled up under the blanket holding hands.” And it was only a few dates later they went out —  camping “wearing a red hat.”

As of 2021, the couple was happily in a relationship but shared no kids.

Talking about kids, Jay has a cute chihuahua named Norman. 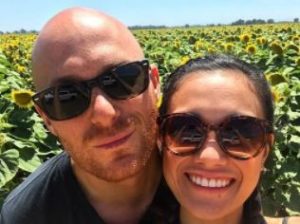 Trivia: Jay and Denise were once spotted at Denise’s cousin’s wedding in Sta. Maria Della Strada Parish in Feb 2019.