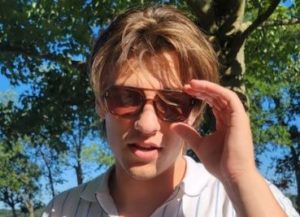 Jake Bongiovi. Does the name sound similar to the legendary singer Jon Bon Jovi? Well, that’s because he is Jon’s son. Carrying his father’s stunning looks and charisma, Jake has already garnered thousands of followers from all over the world; and falling for the same charm was his girlfriend, Millie Bobby Brown.

Learn more about him as this Jake Bongiovi Wiki proceeds.

Jake Bongiovi And Millie Bobby Brown: Dating, How Did They Meet?

It was June 17, 2021, when Jake Bongiovi and Millie Bobby Brown made their first public appearance strolling around New York. The two were spotted masked up and holding hands as they walked around the streets of NY. Also, they took turns carrying Winnie, Millie’s therapy dog, in a tote bag.

As of then, the couple remained silent about their dating life. Thus, how they first met remained a mystery as well. 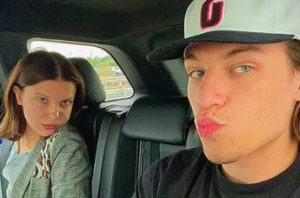 Jake Bongiovi was 19 years of age when he first let the world know about his 2-year-younger girlfriend, Millie Bobby Brown.

Jake Bongiovi’s dad Jon Bon Jovi needs no introduction. But did you know, his real name is John Francis Bongiovi Jr, and he has also starred in more than 10 movies, including Pay It Forward (2000) and New Year’s Eve (2011).

As for Jake’s mom, she is Dorothea Hurley who met Jon while they were both in high school. Reportedly, they were introduced when Jon attempted to cheat on a test by looking at her paper. At the time, she was dating Jon’s best friend Bobby.

The two then went on to have four children together. Jake is the second-youngest of his siblings. The others are named — Jesse, Stephanie Rose, and Romeo Jon.

Jake Bongiovi might have inherited his dad’s genes but he seems to have outgrown him. This handsome young man (as of 19) stands tall at a height of 5 feet 11 inches (180 cm); 2 inches taller than Jon.

Also, Jake is a lot taller than his girlfriend Millie Bobby Brown who is 5 feet 3 inches (160 cm).

His posts then only featured a few of his private selfies and adventures.

Jake Bongiovi graduated from Pennington High School and was all set to join Syracuse University in mid-2020. But it wasn’t clear what subject Jake will be studying.

Back in 2014, Jake played football at Pennington. He even made it to the headlines later in 2018, when he lead Pennington during a national walkout to protest against the government after a school shooting in Parkland, Florida.

Furthermore, Jake has also been a supporter of the BML movement in 2020.

As for his political belief, Jake could be a Democrat. He was one spotted having “a blast traveling” with the N.J. senator, Cory Booker.

So, what’s his job? As of 2021, Jake was still and student who actively played football. Although he had yet to venture into a specific career, he was already helping his dad in community service with the Jon Bon Jovi Soul Foundation.

Guess, Jake looks up to his dad and may aspire to be like him as well. Over his interview during the Pennington national walkout in 2018, he said,

“(Jon Bon Jovi’s) really been some sort of an inspiration to me, as well, but I think it was really special that it was more the students inspiring each other.” He added, “Our bravery spouts from each other.”

The last we saw Jake, he was seeking sponsorship from Rayban. We’ve always known him to a glasses lover, and it was only a matter of time before he got into what he loved.