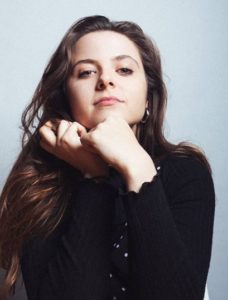 BBC in collaboration with Hulu premiered the season 1 of the TV show In My Skin based on the 2018 short movie of the same name. The show brought along expectations and anticipations along with undivided attention towards lead actress from the show Gabrielle Creevy.

Gabrielle won the best actress in 2019 BAFTA Cymru Awards for the same role while starring in the short movie. While people are expecting to see what she has to bring to the table this time, many desired to know more about her personal life.

So for that, delve into this wiki-article as it unfolds details on her life as you scroll down.

Gabrielle Creevy was born on September 14. Since no further details on her birthday surfaced on Gabrielle, her age was hard to narrow down. But going by her appearance, she is probably in her early-20s as of July 2020.

Gabrielle Creevy was born to her British parents in Neath Port Talbot, United Kingdom. As her social media showcased, she seemed very close to her mother who appeared on her social media a few times. Other than that, no further details on her mom and dad were revealed.

What’s more, Gabrielle preferred keeping everything private about her life. No wonder, she avoided giving away details on her possible siblings.

And as for nationality, Gabrielle proudly recognized herself as a British Citizen. Originally from Port Talbot, she lived in London at the time of penning this wiki on her.

Talking about her physical features, she is blessed with the measurements of 35-26-36 inches which adds more to her natural beauty giving her an appealing look. Her yellowish-green eyes and long brown hair helped further to accentuate her stunning looks.

The award-winning actress was also active on Facebook where she entertained 683 followers reacting to her posts.

Gabrielle’s dreams of starring in movies and TV shows rooted back to her younger age. As a child, she attended Pontlliw Stage School to lay the groundwork for her acting career.

While there, Gabrielle participated in several school productions which helped develop her skills as a young aspiring child actress. Following that, she enrolled at Arts Educational Schools London at the age of 18.

Gabrielle graduated in 2018 with an honorary bachelor’s degree in acting from the same. She played the role of Emma in People, Places, and Things, Young Woman in Machinal, Autolycus in The Winter’s Tale, and Sarah in The Suicide during her time in Arts Educational Schools London.

She also appeared in a radio play titled Found where she played Leah which was produced by BBC Radio 4.

After graduation, Gabrielle made a theatrical appearance on Lose Yourself as Yaz. The director of the play was Patricia Logue.

Whereas, Gabrielle went on to appear in movies such as Operation Mincemeat as Doris Michael, Sophie in Come Home, and Bethan Gwyandaff in In My Skin a TV Movie.

In 2020, she starred on BBC Hulu’s TV show In My Skin. In the show, she brilliantly portrayed the role of Bethan Gwyndaf whereas Rhodri Meilir played her father while actress Jo Hartley appeared as Trina her mother in the show.

As of 2020, Gabrielle Creevy boasted an estimated net worth of $180 thousand.

Getting into the dating front of Gabrielle Creevy, she avoided openly speaking about her relationship. With all of the beauty in the world which she possessed, she must’ve had a handful of admirers.

But, people never caught her publicly displaying love and affection towards her secret boyfriend. Even though she has at least dated once as of July 2020, no potential relationship prospects surrounded her at the time.

The versatile actor, Rhodri Meilir was once again in the limelight in 2020 as he was cast as Dilwyn...