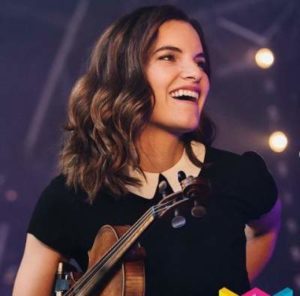 You here means, you already saw Gabriella Laberge perform a beautiful rendition of “Goodbye My Lover” by James Blunt on her voice and her violin.

Gabriella Laberge impressed everyone on the star-studded judges’ table, on the audience as well as on stage.

Everyone present in the hall including judges Sofia Vergara, Howie Mandel, Heidi Klum, and Simon Cowell gave her a standing ovation that left her in tears.

In pre-taped footage from the show, Gabriella had spoken about how performing on AGT has been a lifetime opportunity for her. She recalled watching AGT every week, growing up. But she never really expected to be on the stay someday.

Gabriella Laberge On The Voice

AGT, however, is not Gabriella Laberge’s only time on a national singing competition platform. Just like now, with a soulful voice and violin in hand, she appeared on The Voice France in 2016. She had wowed the crowd as well as the judges with her blind audition performance of Coldplay’s “The Scientist”.

So, Gabriella was a candidate for Season 5 of The Voice France. She was on Mika’s team.

Following the blind hearing, she performed “Castle in the Snow” by The Avener during the battle round, “Make room for me” by Julien Clerc during Ultimate Trial, “Stressed Out” by Twenty One Pilots, and “As free as me” by Calogero during Quater Finals. Afterward, she was eliminated.

Still, Gabriella’s footage of the blind audition collected as far as 72 million views on YouTube as of July 21, 2021.

In fact, she rose to fame after the clip went viral earning a significant fanbase within and beyond France.

So, Gabriella Laberge is a Taurus and therefore celebrates her birthday every year on the 20th of May. She reached the age of 28 in 2021.

Gabriella Laberge is a French-Canadian from Montreal. She was born in Saint-Basile-le-Grand, Canada. As of the time of this writing, she called Montréal, Québec, in Canada her home.

However, she did travel to places such as Miami in the States with her family.

From what fewer times Gabrielle shared glimpses of her family on social media her followers are aware of how closely she resembles her mom.

So far, Gabrielle only mentioned her parents when she wanted to have the funniest video for her Twitter and her dad wanted to be a part of it. And, when she dedicated a special song to her mom on Mother’s Day.

She had also composed a beautiful piece for her grandfather who had passed away.

That been said, Gabrielle seems to have sisters, but the information is not yet confirmed.

Gabrielle Laberge, who looks like a beautiful actress from a movie scene, when performing her piece on stage stands to a height of 5’4”.

Until July 21, 2021, Gabriella Laberge had 51.4K followers on her Instagram @gabriella.mu.

Gabriella was also followed by 48K Facebook users on her musician/band page @gabriella.musique.

Then, her ‘Gabriella’ channel on YouTube entertained more than 309K music fan subscribers.

Gabriella Laberge had around an estimated $1 million net worth before the world first saw her on AGT.

Before the singer and violinist found herself on AGT believing that her American Dream could come true on the platform, she unleashed her music collection and merchandise on Gabriella’s World website.

She also shared her music catalog on platforms like Spotify.

And as she continues to work on her self-composed songs, they were also featured in TV shows like Lance et Compte and Mohawk Girls. Her “Zombie” cover had been played on World Of Dance, the Jennifer Lopez show on NBC. The episode aired in June 2020 and a gorgeous 13-year-old girl had danced to Gabriella’s voice.

In 2018, Gabriella signed with Polydor France and released the first single “Tu es Flou” of her second album. The next year, she not just released her second album “Foreign” but also represented France in the “Destination Eurovision 2019” competition. She moved the crowd while performing her original number “Never Get Enough.”

Gabriella Laberge opened up that her biggest dream is doing music for the rest of her life. But never really exchanged her thoughts on dating or her own dating life. So, one could not tell, if she had a boyfriend.