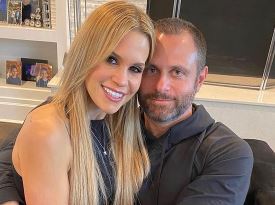 Evan Goldschneider is the husband of RHONJ star, Jackie Goldschneider. Between 2019 and early 2021, he appeared in the 3 episodes of “Real Housewives of New Jersey”.

Despite a long marriage, Evan’s relationship with Jackie seemed on the brink of a collapse amid cheating allegations. However, the couple withstood the trying times.

This Evan Goldschneider wiki explores facts about Jackie Goldschneider’s husband including his age and height. Furthermore, it attempts to reveal his net worth, job, and birthday.

In 2020, Evan Goldschneider touched the age of 46. Likewise, 8th August marks his birthday.

While Evan is a Leo, Jackie was born a Libra.

According to his LinkedIn, Evan was living in New York, New York as of 2021. Previously, Evan reportedly lived in places like Tenafly, NJ, and Greenwich CT. Perhaps, the latter was his hometown.

To mention his academic qualifications, Evan earned his Bachelor’s Degree in Economics from the University of Michigan. Also, he graduated from Georgetown University McDonough School of Business in 2001 with an MBA in Finance.

In 2020, Evan showed off 30 pounds weight loss. As a child, he grew up with a slim body. It wasn’t until he reached his teenage years that Evan gained weight. At one point, he weighed 220 pounds.

Finally, as a high schooler, Evan started working out and eating healthy. He eventually lowered his weight to 180 pounds and maintained it for years.

However, Evan weighed back to 230 pounds and put on a “dad bod”. Admittedly, he again lost weight to set a better example for his kids.

As of 2021, Evan was available on all 3 major social media platforms.  That said, he enjoyed the most reach on Instagram. On the platform, some 9.1 thousand people followed Evan.

According to sources, Evan Goldschneider has a whopping net worth of $20 million. Evan himself had yet to confirm the reports, as of 2021.

Moving on to his career, Evan received his start at “Credit Suisse”. He was with the company for 2 years, working as an Analyst.

Then, Evan worked for “JP Morgan Chase” as an Associate for 2 years.

Between 2004 and 2006, Evan was a Vice President for the “RiskMetrics Group”. While there, he was responsible for managing and growing the client base across all market and credit risk products.

Leaving “RiskMetrics Group,” Evan joined “Olympia Capital Management” as its Senior Vice President. In Sept 2007, he left the company and began working for “Bank of America Merrill Lynch”. However, his gig lasted only 10 months.

From July 2012 until February 2016, Evan was a Partner at the “Beachhead Capital Management, LLC”.

In July 2016, Evan Goldschneider joined “Hawthorne Lane Capital” as a Founding Partner. 5 years on, he still held the job title. Working for the firm, Evan raised significant assets from a variety of institutional investors for managers on the platform.

In August 2020, Jackie and Evan celebrated their 14th wedding anniversary. Celebrating the milestone, Evan shared a photo from their big day and wrote— “14 years later and I love you more every day. Happy anniversary. @jackiegoldschneider”.

Jackie and Evan had tied the knot in 2006. 3 years earlier, the duo met for the first time at a Manhattan Dive Bar.

In February 2020, opening about their marriage, Jackie told “The Daily Dish” that they were smitten. By her admission, she gets butterflies every day because of Evan.

Even though she wasn’t big on or*l sex, Jack told Page Six, Jackie revealed they were open to a resolution.

Evan’s relationship with Jackie faced numerous roadblocks. However, none appeared more controversial than the cheating allegation made by Jackie’s RHONJ co-star, Teresa Giudice. When Teresa claimed Evan was cheating with other people in the gym, Jackie defended their marriage.

The whole drama played out in an episode of RHONJ. Jackie and Evan watched the episode and according to her, the things between them ended up being fine. By her admission, Jackie is proud of how she handled the situation.

With divorce rumors out of the equation, Evan and Jackie once again began living happily with their kids (2 sets of twins): Jonas & Adin and Hudson & Alexis.