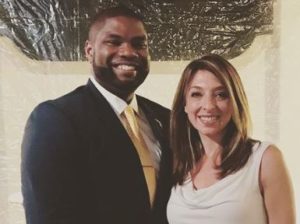 Meet Erika Donalds, popular as the wife of the Republican lawmaker Byron Donalds.

In June 2021, Byron went viral for supporting former President Trump on CNN. His claims that “Donald Trump has rejected white supremacy were met with a super-cut of the former president making inflammatory comments,” was making headlines of every news.

And naturally, his wife garnered much attention from the supporters, as well the opposers. Thus, here we are presenting this Erika Donalds bio to ease everyone’s curiosity.

As per her birthday, Erika is of the Leo zodiac.

On Erika’s 40th birthday, Byron took it to his IG to share their lovely picture captioned,

“Happy Birthday to my wonderful wife of 17 years, @ErikaDonalds. She’s an incredible partner and mom to our 3 boys. Thankful for her dedication to our community and her support this past year. I’m beyond blessed.”

Erika Donalds is of American nationality.

She was born and raised in Tampa, Florida, and moved to Tallahassee, FL as she turned 18. Even as of 2021, she didn’t leave her hometown and was living in Naples, FL.

Erika Donalds is the daughter of the owner/president of The Real Connection Marketing Group, Gayla Blanton Lees. Her mother, Gayla is a Hillsborough Community College alumna who also worked as a marketing director of The Optima Foundation. As of 2021, Gayla (birthday: May 27) was doing well at the age of 69.

Apart from her parents, Erika’s love for the family was equally split to her 3-year-younger brother, Preston Lees (birthday: July 15). He is a Full Sail University who went on to become the art director at The Real Connection Marketing Group. Also, he was working as a “Content Specialist / Competition Service” at Mt Brighton.

Trivia: Erika’s maternal grandfather Linwood Dewalt Jr. passed away at the age of 93 on September 29, 2016.

As of June 2021, Erika entertained 1.2K followers on Instagram @erikadonalds, and 2.7K followers on her Facebook page @@edonalds.

Erika Donalds is the president and CEO of a non-profit corporation called The Optima Foundation. According to others, the organization was formed to support the establishment of free public charter schools and to expand students’ opportunities for high-quality education.

Mentioning her prior jobs, Erika worked as the “chief financial officer/ chief compliance officer & managing partner” of the DGHM & Co. LLC for over 16 years. Meanwhile, she also became the Commissioner of the Local Government Committee Chair at Florida Constitution Revision Commission from 2017-2018.

Also, she has been a school board member of the Collier Country Public School for over 4 years.

In light of her education, Erika studied BS, Accounting at the Florida State University from 1998 to 2002. Later, she went on to join a 1-year accounting course at Florida Atlantic University in 2005.

Erika first met Byron Donalds when she was still attending FSU circa 2000. Back then, the two were both a part of the Delta Sigma Pi business fraternity, and it was only a matter of time before they stumbled upon each other.

Dating for years, the couple then went on to hold their wedding on 15 March 2003.

As of 2021, Erika And Byron shared over 17 years of marriage and three kids. The eldest one is named Damon Donalds and he was one heck of a football player. In 2021, the 6 feet 2 inches (187 cm) rising football player signed a letter of intent with Holy Cross at the Community School of Naples.

Overall, Erika, her husband, and their kids made one happy family; and also a religious one. They were a Christian devotee, who would dress up perfectly to celebrate the birth of Savior Jesus Christ.