Home EntertainmentEloise Fouladgar Family: About Her Dad, Mom And Sister

Eloise Fouladgar Family: About Her Dad, Mom And Sister 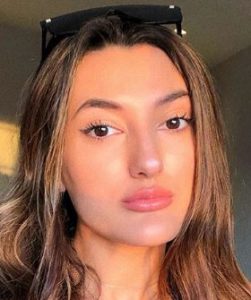 Eloise Fouladgar is a social media star from England and the way it appears she is here to stay for a very long time. She and her boyfriend James Hall also made it to the online news outlet where they revealed that they made £3000 to £3500 per posts and sponsored content.

As of September 2020, Eloise has been introduced as the first member of the UK TikTok collective, the Wave House, similar to Sway House. So, delve in to learn more about her personal information, including the one that is on her dad, mom, and sisters while we also cover net worth.

Eloise Fouladgar is a Brit social media star who earned prominence with her TikTok videos.

As a beginner, she did the same things others do at first, following trends and performing the routine. Eloise posted her first TikTok starting from April of 2019. She mostly made lip-sync videos with on the platform and it featured almost all of her family members.

Eloise diversified her TikTok’s as she pulled different pranks on her boyfriend. Whereas, she also started narrating monologues on other videos where she edited and joined snippets that gave away the gist of the video in 15 seconds.

By 2020, she earned 2.4 million followers with a verified account and 60.7 million likes for her TikToks.

Apart from this, Eloise also found equal success on Instagram where she accumulated 138k followers at the time of penning this wiki.

Moreover, Eloise decided to expand her reach even further and created an eponymous YouTube channel. The channel contained four videos where she earned 14.7k subscribers at the time of this writing.

Eloise Fouladgar was born to her dad Mansue Fouladgar and her mom Nicole Waters in London, England. She was born on 20 November 1997 and that made her 22 years old at the time of this writing.

As for her parents, Mansue attended St. Johns Epping school. Later, he owned a sports shop among other businesses in his hometown of Ealing, London, and has also worked as top-level personnel for other businesses.

Surprisingly, Mansue was also celebrated as a local hero when the August 2012 riot happened in London. When Ealing was getting ravaged by rioters, Mansue’s sports shop was also attacked by the rioters.

But, after getting informed by one of the employees, he decided to confront them by himself.

Mansue armed himself with the pool cue and demonstrated his bravery though the size of the mob increased and ransacked his shop. Whereas, no other information has been shared regarding her mother.

Moving on, Eloise grew up with two other siblings: her sisters, Katelyn Fouladgar and Brooke Fouladgar. As of 2020, Katelyn was attending the University of Birmingham.

As for Brooke, she went to St. Benedicts school and graduated from the same. Following that, she enrolled at the University of Nottingham in 2020 to study architecture.

All of the family members are very close to each other and shared a strong bond. Each of the three siblings is a close resemblance of their mother Nicole. Whereas, Nicole also speaks proudly of her children.

As for Eloise, she attended London’s City University studied politics. But she decided to drop out to pursue her career in social media. Even though her mother didn’t fully submit to her decision, she wanted Eloise and her boyfriend to do whatever made them happy.

How Much Is Eloise Fouladgar Dad Worth?

Mansue Fouladgar, dad of Eloise Fouladgar, worked as the director for London Joggers Limited in West Ealing, London. He started working for the company around 1995. He served in the same position for over 25 years earning him an attractive amount of salary and profit as he owned the companies.

The London-based businessman also joined Marineplace Limited in 1995. The company focused on the development of building projects. But, he resigned from the company in 2019.

In the same year, he also started working at Rossbell Limited as a company director. This Argyll Street-based company also managed real estate on a contract or for a fee.

Mansue Fouladgar is also actively working in companies such as Newpark Construction Limited, Finish Line Limited, In West Ealing Limited, and Alpha Clear Water Ltd as of September of 2020.

As his social media posts suggested he certainly gave a lavish lifestyle to his wife and kids. The could often be seen traveling abroad for a family vacation. So, this in a way concluded that he either inherited or earned whatever he is worth.

And Eloise Fouladgar’s dad’s total net worth was estimated to be at least $5 million.

Did She Join The Wave House?

The Wave House, U.K.’s very own TikTok collective revealed Eloise Fouladgar as the first member of the house. While she took a milk bath, two masked individuals assisted her in the process of unmasking. The videos, at the time of this writing, earned 37.4 million views in total with 4 million likes.

Not only the members but the Mansion they’ll be living in also stirred became a point of attraction to many. As of the time of this writing, five members of the group have been revealed.

And they’re receiving mixed reviews from the TikTok users. As the revealing is done by ‘unmasking’ the members, several fans commented to ‘put it back on’. And in response to that, they even made a TikTok which assured everything is going to make sense in the end.

It was the 7th TikTok from the Wave House which went on to earn 2.1 million views within 8 hours.

0 Replies to “Eloise Fouladgar Family: About Her Dad, Mom And Sister”