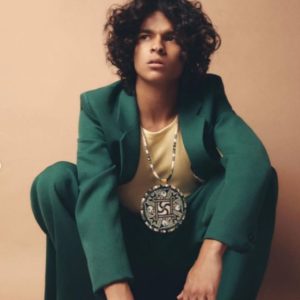 D’Pharaoh Woon-A-Tai is a Canadian-born actor starring in FX’s new show Reservation Dogs. Ever since the announcement, his old and the new fans which he made were interested to know more about him.

So, scroll down this D’Pharaoh Woon-A-Tai Wikipedia to learn more about his age, girlfriend, ethnicity, and height.

FX’s Reservation Dogs is the brainchild of Seminole/Muscogee Creek filmmaker and showrunner Sterlin Harjo. In the show, D’Pharaoh Woon-A-Tai landed the role of Bear, the unofficial leader of the group. He has a nervous energy about him so naturally, he sometimes, fumbles through situations.

The Black belt holder in Shotokan Karate studies his native language Ojibwe and participated as a first nations drummer.

D’Pharaoh Woon-A-Tai turned 19 years old in 2020. He celebrates his birthday every year on 20 September. Per that birth date, D’Pharaoh’s zodiac sign is Virgo.

D’Pharaoh Woon-A-Tai stands tall at the height of 5 feet 7.5 inches (1.71 meters). He keeps long hair which happens to be his distinct feature. The dark handsome man weighed not more than 55 kilograms (121 lbs).

D’Pharaoh Woon-A-Tai, with the Oji-Cree-Guyanese ethnicity, was born to his anonymous parents in Oji-Cree, Canada. Almost no information surfaced on his parents. However, he was very close to his grandparents: Frank Woon-A-Tai and Maureen Woon-A-Tai.

Going by some of the social media posts, D’Pharaoh and his twin brother live with their grandparents.

Frank served and resigned as Chairman and Technical Director of the International Shotokan Karate Federation in Canada to establish the IKDS after 40 years. He emigrated to Canada 40 years ago but always find time to develop karate in Guyana. Frank served as the president of Guyana Karate College. He held a BA degree in Japanese Studies from the University of Toronto.

As for D’Pharaoh’s grandmother, Maureen Woon-A-Tai, 8th Dan, was a Deputy Chief Instructor making her the first female traditional karate master in the world to hold such a position.

As already mentioned, D’Pharaoh has a twin brother named Mide Xxavier Woon-A-Tai. Mide is also an actor by profession starring in the TV series Coroner, according to his own IMDB page.

A TikTok account exists with a handle name (@dpharaohwoonatai) dedicated to him. However, we couldn’t say for sure if he actually ran TikTok. Nevertheless, it contained 45 followers, only six videos, and generated 70 likes for the videos until 10 Aug 2021.

On Instagram, D’Pharaoh went by the name (@dpharaohwoonatai). He was able to attract 3,337 followers in total with only 4 posts. However, he couldn’t be discovered on Facebook.

A profession in entertainment demands a whole lot from whoever is ready to immerse himself into an art form they pursue. Some, who are no less hardworking than others, try to land a role in movies and TV shows, that could propel their career to a new height, but wouldn’t be able to manage to do that at all.

While others like D’Pharaoh Woon-A-Tai find their time to shine not long after the debut of his career. His first major role on TV came in 2018 when he starred in a TV show titled Holly Hobbie. He portrayed the character, Chase Whaley, in three episodes.

But, his breakthrough role came in 2021, when he landed the role of Bear in FX’s Reservation Dogs. Ever since then, several major publications have covered his role of D’Pharaoh including Vogue.

With acting becoming his first love, D’Pharaoh found his passion for fashion early on. During his press tour for the promotion of the show, the actor stated that being able to share his story in the form of clothes made his dreams true.

D’Pharaoh donned the design of Avo Yermagyan. He promoted his indigenous culture through fashion choices. Now that all eyes are on him, we are excited to see what turn this actor’s career will take and led him to.

Good looking is an understated phrase to describe D’Pharaoh Woon-A-Tai. A gentleman at heart and profile speaks talent, he is a sweetheart, women would definitely love to know more about him. But, he is a private individual about his life and shared almost no information on his love life or former girlfriend.

Hence, D-Pharaoh Woon-A-Tai’s dating life is a mystery until Aug 2021. However, we hope to learn more about his love life as his career progresses further.