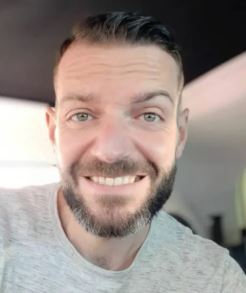 Dimitri Garcia became a talk of the town after sources close to Amber Portwood introduced him as the reality star’s boyfriend.

Get to know Dimitri better by looking into his bio. Also, find out his nationality, height, and occupation in the piece below!

Dimitri Garcia is from across the Atlantic — France, to be more specific. However, he later resided in Belgium. Thus, the likelihood of him fluent in English was slim.

According to reports online, Dimtri was 39 years of age when he came into Amber Portwood’s life. If true, he was born in the year 1980.

As of late-April 2020, little else had been unveiled about his biological family (including the parents) back home. The same degree of anonymity enthralled his day job.

Peeking into his Instagram, Dimitri was followed by Amber’s former lover Gary Shirley and his wife Kristina on the photo-sharing website. Also, he seemed like a guy who took an interest in basketball. Surely, his six feet height was of great help.

Thanks to the reality TV fam, Dimitri had pulled 8.8 thousand followers on Instagram by Jan 2021.

Quoting a source, the said media outlet wrote about Dimitri being a superfan of Amber but not the show. The lovebirds allegedly met over the internet — IG, to be more specific. Speaking about their initial talking phase, Amber revealed:

“It was super chill compared to what was coming at me. I had other guys trying to talk to me, he was the only one that never really brought up d–k pics and things like that,”

By January 2020, Dimitri’s romance with Amber blossomed into a serious affair. To strengthen their bond, he even flew to America and announced his arrival by posting an image of a Whole Foods Belgian Waffle.

As of 10th January 2020, Dimitri and Amber weren’t Instagram official. However, tabloids online reported that the two were busy filming the new season of “Teen Mom OG.”

As of late-April 2020, Dimtri still hadn’t made IG official with Amber. Nonetheless, the 28 April 2020 episode of “Teen Mom OG” featured the two appearing all smitten.

Because Dimtri’s romance with Amber was still in its early stage, the duo couldn’t qualify for the 2020 edition of “90 Day Fiance.”

Finally, in June 2020, Dimitri confirmed their romance as she uploaded a photo of them locking lips. As the year progressed, he continued sharing pictures of them.

When the COVID pandemic hit, Dimitri was outside of the US and couldn’t be with Amber. Unable to enter America, he kept professing her love for her with arts & crafts projects and loving social media posts.

Dimitri’s post dated back to July 2020 with the photo of Amber read:

“Time has not separated us, but on the contrary, has strengthened our confidence between us but above all our love. You are beautiful my baby love and not only from the outside. I love you and we’ll be together soon, I promise ❤ #love#together”

In the end, the distance proved too much for their love to bear. In January 2021, The Sun reported Amber and Dimitri parted ways on good terms.

Amber Portwood Before Him

The news of Dimitri Garcia and Amber Portwood coupling arrived six months after the reality star allegedly attacked her ex Andrew Glennon with a machete.

When the reported attack transpired, Andrew was holding the duo’s 1-year-old child James.

Following the incident, Amber was arrested and charged with domestic battery, domestic battery in the presence of a minor, and criminal recklessness with a deadly weapon.

Meanwhile, Dimitri had two kids from a previous relationship. Of the two children, one was 13 while the other was 11.

Teen Mom OG 2020 (season 8b) returned with Mackenzie McKee dealing with the temporary split with her husband...