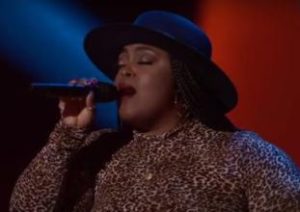 The Voice season 19 is here and so are the “make you forget everything” voices. In October 2020, a similar voice that made judge Blake Sheldon forget even “what she sang” echoed in the auditorium. And the contestant with the mesmerizing voice was Desz Washington.

Though this season The Voice had no in-studio audience to cheer the contestants, Desz had her family supporting virtually from their home. A blessing from them and all the hard work she put into it, Desz was able to get all four chair turns from the judges.

Here is everything you need to know about the probable The Voice winner Desz Washington.

Over Instagram on July 16, 2019, she uploaded a picture of herself singing captioned,

Though we are not sure about it, some believed that day was her birthday. If that’s the case it makes her of Cancer zodiac.

Desz Washington, with real name Desiree Washington, was raised in her hometown Houston, TX. And as amazing as her voice might be, equally amazing is her early life story.

Over The Voice, Desz shared that when she was 11 years of age her mother asked her to sing her favorite song, “I Know Who Holds Tomorrow” if she were to die someday. Unfortunately, a few months later, Dez’s mom passed away from a brain aneurysm and Desz kept her promise.

That was her first solo performance ever at her mother’s funeral.

But, Desz has always been into music all her life; singing in church choirs, city choir, and school choirs. When she joined Prairie View A&M University, she took a music tech class and it introduced her to composing music on the Garage Band app.

This opened up a whole new window in her house of music. Then, she started going to open mics and giving herself into the Houston music scene until she found herself in The Voice.

Even though her mom passed away early on, Desz had a supportive family. They encourage her for the audition as well and a family of 5 with a small kid was seen over the auditions screen cheering for her.

Trivia: Desz was a part of Kanye West’s Sunday Service Choir and spent 2019 touring with them.

Desz’s most distinct features would her braided hair and a big bright smile. But, she doesn’t braid it all the time, you could find her with open hair and even short hair over her Instagram.

Also, she had a Youtube channel @DeSz Music with 64 subscribers.

In 2020, Desz Washington’s net worth was estimated to be around $150 thousand.

Desz defines herself as a “Singer, Songwriter, Artist/Performer, Performance/Vocal Coach, Beautiful Soul”. She gets her inspiration from artists like Anita Baker, Jill Scott, and Beyoncé. Also, she had a wish to collaborate with BJ the Chicago Kid.

Furthermore, she was a D’angelo fanatic.

You can find her original music named “Touch” on Spotify. In June 2020, she was working for a new EP.

As for her The Voice journey, Desz sand Toni Braxton’s “Un-Break My Heart” for her audition. Stunned by her voice, Kelly and John were the first to press their button, and Gwen and Blake followed shortly after. However, the episode was left at a cliffhanger about who Desz picked as her coach.

Fans prediction was Team Kelly all the way, but it could be team Blake as well. We say this because one fan tweeted “Blake,” which Desz ended up liking, so it could a hint she left for us.

As of October 2020, there was no hint of Desz Washington’s husband or boyfriend over her social media. Maybe she was focused on grounding her career or she could be secretly dating as well.

But during the 2020 quarantine, Desz was living alone. She shared,

“The no human contact thing killed me inside! I mean there were other virtual options but there’s nothing like physical energy in a room.”

Furthermore, Desz was busy with “work from home, sending in Video auditions/ submissions, and just catching up with follow-up emails, unpacking things at her apartment.”

So, it could be that she just didn’t have time for a boyfriend.