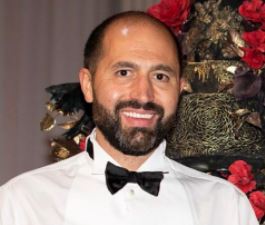 In Feb 2021, Christian piqued the fans’ interest after Christine revealed her first pregnancy with him. In addition to the revelation, Christine also shared that “they knew” they wanted to create a family in 2021 and “envisioned herself pregnant” in her daily meditations. May that year, the couple welcomed a son.

So, who is the baby daddy of Christine Quinn’s child? Learn about him as this Christian Richard wiki proceeds.

As per his birthday, Christian is of the Cancer zodiac.

Christian Richard originally went by the name Christian Dumontet. He was born to parents Nancy and Francios and has a sibling named Philip Dumontet.

His brother, Philip was the CEO of Whole Sol Blend Bar (who he founded with his wife) and a former CEO of Dashed (now acquired by Grubhub). Also, he was the race director of Boulderthon. Furthermore, he was even featured in Forbes’s top young 30 Under 30 Entrepreneurs.

Talking more about his family: Christian’s maternal grandmother Nancy M. Miraglia passed away in October 2011, at the age of 92. She was a secretary for Miraglia Associates, Manalapan Township. Also, Christian has cousins named Charles Christophe, Nicholas Miraglia, Gregory and Jeffery Marszal, and Stephanie and Andrea Waksmundzki.

Before 2021, Christian was living in Los Angeles, CA. He moved to LA from Boston, MA; which could be his hometown.

As for his ethnicity, Christian is Caucasian.

In May 2021, Christian had no social media presence. However, we stumbled upon a Facebook account that could belong to him. It had no post at all and mentioned its hometown to be Middletown, New Jersey.

Mentioning his distinct features, Christian has receded hairlines but a thick beard. Also, he has an oval face and a cheerful smile.

Christian Richard is a retired tech mogul who flaunted a stunning net worth of $20 million.

In 2021, he was working as the CEO of Black Swan Systems (which he co-founded in Jan 2020). Before that, he was the CEO/Co-founder of Foodler (reportedly the first online food delivery business) for almost 13 years.

His first job was listed as a software engineer at Cisco from Jan 2001 to March 2007, over his Linkedin account.

In light of his education, Christian attended MIT where he specialized in the “engineering of all types including software platforms.”

Overall, Christian lived a lavish lifestyle. He owned a private jet and lived in a $5 million home he bought for Christine. According to Christine, the house that Christian brought for her was her dream home even before she met him.

Also, Christian loved to travel and he did it in style. Aside from his luxurious private jet, Christian often chartered luxury yachts as well.

Christian Richard first met Christine Quinn as “the other woman”. This is how Christine recalled the start of their relationship. She added,

At the time, Christian went on a date with Christine’s friend but they didn’t hit it off, so he was passed on to Christine, and the rest is history.

Dating for a while, Christian and Christine were then engaged in February 2019. The same year on Dec 15, 2019, the duo secretly held their wedding in a Los Angeles cathedral. Their “winter wonderland” themed wedding was attended by around 75 friends and family.

As for their kids, the lovebirds shared that they would love to have two boys. Their firstborn, Christian Georges Dumontet, arrived via C-Section on 15th May 2021 weighing 6 lbs., 14 oz., and measuring 20.5 inches long.

Christian loved Christine to the moon. Originally, he never wanted to be on Selling Sunset. But he changed his mind and decided to do it for her. This is also why he seemed shy on camera.

Did u know: Christian is Christine’s second husband.