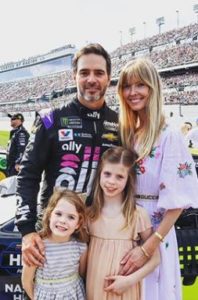 In July 2020, seven-time NASCAR Cup Series champion Jimmie Johnson tested positive for coronavirus. The news struck hard on the sports and entertainment industry with thousands of fans flooding his social media pages and wishing him to get well soon.

Moreover, rather than himself, Jimmie’s concern for daughters became the emotional side of the story as his wife also tested positive to coronavirus. His wife Chandra Janway stood by him through his thick and thin and surely will do the same for him during this difficult time.

This bio is based on the life of Chandra Janway, so delve in to learn more about her.

Per her date of birth, she secured Cancer as her zodiac sign.

Chandra Janway was born to her father Jack L. Janway and her mother Lynn Janway. Her parents raised her in Muskogee, Oklahoma, the United States. Besides names, no other information on her parents caught the media attention including their jobs.

More on her family, Chandra had three siblings: Jordan Jor-el Janway, Caleb Janway, her two brothers, and her sister Marianne Janway. However, Jordan died in a skydiving accident in 2014 near San Diego, California at the age of 27.

Chandra attended and graduated from the University of Oklahoma in 2000. She earned her degree in business communication at the time of graduation.

As an aspiring model, Chandra had everything from looks to intellectual abilities. Truly a beauty with a purpose, she stands at a height little above 5 feet 8.5 inches (1.73 meters) while she weighed 56 kilograms (123 lbs).

Moreover, the former model stunned most people with her blonde hair and desirable body measurements of 34.5-25-35 inches.

Along with her career as a model, her marital association with NASCAR driver Jimmie Johnson put her on a spotlight in various mainstream media and sports and entertainment as a whole.

However, she never desired on riding the coattail of her husband to establish prominence and build a career as a social media influencer. This is why, she was nowhere to be found on the highly used social media platforms including Twitter, Facebook, and Instagram.

Soon after Chandra graduated in 2000, she moved to New York to pursue her modeling career. Soon after she moved, Chandra signed a deal to represent Wilhelmina International Inc.

Along with that, she pursued her thriving career as an actress. She landed the role of Jenna/Jill in the 2007 movie Devil’s Canyon. However, that turned out to be the only on-screen appearance she ever made as an actress.

Rather, she applied her expertise in business communication to look after the foundation named after her husband. The foundation established in 2006 supports children, families, and communities in need.

Moreover, Chandra Janway was estimated to have a net worth of $2.5 million.

Chandra Janway and her Jimmie Johnson met each other in 2002. Jimmie’s friend and fellow NASCAR driver Jeff Gordon introduced the two and the couple hit off immediately after they met. Jeff’s wife Ingrid Vandebosch and Chandra, both were modeling in New York at the time.

After dating for a few months, Chandra and Jimmie got engaged in 2003 on a snowboarding trip.

A year after in 2004, the couple tied knots in St. Bart’s. As a gift of the wedding, Hendrick Motorsports owner and Jimmie’s former boss Rick Hendrick borrowed the newly married his 150-foot Yacht to sail around on their honeymoon.

Chandra gave birth to their first daughter Genevieve Marie Johnson in 2010. In 2003, she and her husband welcomed their second daughter Lydia Norriss Johnson.