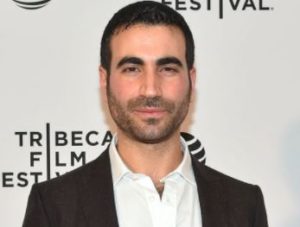 When we think about Apple TV+ Ted Lasso, we think about Roy Kent, the irritable now-retired football player, portrayed by Brett Goldstein. And now that the comedic series’ season 2 started with some rather epic dating advice, it made us wonder what was going on with the protagonist’s real-life relationship status.

Stay till the end to know about Brett Goldstein’s partner. Also, be updated if Brett ever moved on from his dating life to a married one.

Brett Goldstein was originally hired to be a writer on Ted Lasso. But as he read the story, he felt a connection to the character “Roy Kent”. So, he self-taped five scenes, submitted them to the directors, and snagged the role of the protagonist.

According to him, there might be one scene, in particular, that may have landed him the role.

The series also went on to become Brett’s breakout point as an actor.

His portrayal of Roy Kent was so well appreciated that he even got one of the 20 Emmy nominations designated to Ted Lasso. Also, he won two Writers’ Guild Awards with the show’s writing team.

Fun Fact: Brett had decided to pass up on the opportunity to work on Ted Lasso. But then Bill Lawrence reached out to him and said, “you’re f**king mad if you turn this down for some stand-up gigs.”

Corresponding to his birthday, Brett is of the Cancer zodiac.

Brett Goldstein comes from a British Jewish family. This also might be the fact why he never let his parents see him perform stand-up comedy. But then again, his father owned a strip club (which he admittedly bought during a midlife crisis.)

Talking about his siblings, Brett has a sister named Tara Goldstein Carr. She is the co-founder and principal of the School of Comedy in England. As of 2021, she was happily married to  Matt Carr with 2 kids.

Brett Goldstein garnered a net worth of above $3 million by 2021.

Ever since a kid, Brett always knew that he wanted to work in the entertainment industry. So, at the age of 29, he aimed to be a stuntman at first and “used to pretend to be Indiana Jones and jump off roofs and slide under garage doors.” The traits of which he even carries now. From time to time Brett does his own stunts.

In light of his education, Brett attended Warwick University for his film studies.

Someday, Brett hopes to work with the Muppets. He said, “I do that, then I’m dead.”

If Brett hadn’t stepped into the entertainment industry, he would probably have been a footballer by now. Because his father was a “football hooligan” and always encourage him to be a footballer.

Brett Goldstein Partner: Is He Married Or Still Dating?

As of 2021, Brett Goldstein wasn’t married. Rather he was still enjoying the dating game and according to his fellow Emmy nominee Hannah Waddingham, he was already taken.

Yes, Hannah Waddingham confirmed that Brett Goldstein “has a girlfriend,” but didn’t reveal her name. So, we dug around a little but no luck! It seems that the actor cherished privacy in his dating life, and kept his partner away from the spotlight.

However, this wasn’t the first time anyone pointed out Brett’s partner. Back in Oct 2020, a fan replied on Brett’s Twitter post, “I believe he has a girlfriend.”

In conclusion, Brett might be silent about his off-screen dating life, but we are pretty sure that, as a writer, some of his thoughts were reflected in Ted Lasso’s season 2. He said, “you deserve someone who makes you feel like you’ve been struck by f**ing lightning. Don’t you dare settle for fine!”

So, we guess that, after stumbling onto many strangers, Brett’s finally met that one person who really struck him with a “f**ing lightning.” We also hear the wedding bells ringing in a distance.