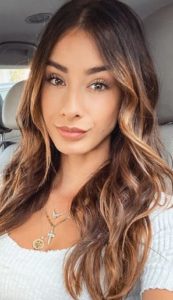 Brenda Patea gained recognition competing in Germany’s Next Top Model in 2017. She turned heads of people appearing in the Grand Slam title while she was cheering her boyfriend, Alexander Zverev.

Scroll down this wiki-style article that will assist you through the personal and professional life of Brenda Patea, Alexander Zverev’s girlfriend.

Brenda celebrated her 26th birthday on 2 September 2019. She was raised in Berlin, Germany alongside her brother, Tobias “Tobi” Hubscher, an engineer by trade.

Little to almost no details were found on her father, but she has a proud and loving mother named Heike Hubscher.

Brenda hails German-Romanian ethnicity along with her family.

Everything changed for Brenda Patea when she took her shot at Germany’s Next Top Model or GNTM (2017).

She appeared in the 12th season as Brenda Hubscher, one of the fifteen models in the team of judge Michael Michalsky. She was eliminated in the eleventh episode for her poor performance at the photoshoot and runway.

After GNTM, Brenda walked in the Mercedes-Benz Fashion Week. She was also awarded by Misfit Models in 2017.

Besides her career as a runway model, she had worked as an insurance clerk.

In 2020, she kick-started her acting career landing the role of Alicia Bjelic in Gute Zeiten, schlechte Zeiten (2020).

With Brenda’s career as a model and an aspiring actress initiated she is sure to see a steep growth in her net worth.

Brenda Patea and Alexander Zverev met each other in Paris, France. Alexander was in the town as he had signed up in Paris Masters 2019 whereas Brenda was there for business purposes. 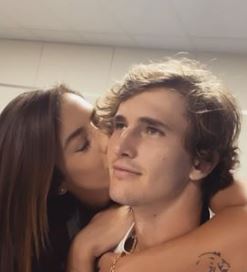 Brenda and Alexander together on 5 January 2020 (Pic: Brenda Patea’s Instagram)

In an interview, Brenda disclosed the pair’s unscheduled rendezvous that read,

“We met in Paris on October 28th. I was in town on business and sat in a cafe where Alex was with a friend. Our eyes met. He came to me and talked to me.”

With Brenda’s inadequate knowledge of the sport of Tennis, she didn’t even know she had been conversing with the No. 7 seed in the tennis world.

The duo confirmed they were dating after a month since they met in an interview.

In the same way, Alexander was dating tennis pro-Olya Sharypova before he met Brenda.

Brenda and husband hopeful Alexander could be seen spending plenty of time together in either of their Instagram handles, but we are yet to see whether the pair would be committed enough to get married.