Who Played Beta On The Walking Dead? Identity & Face 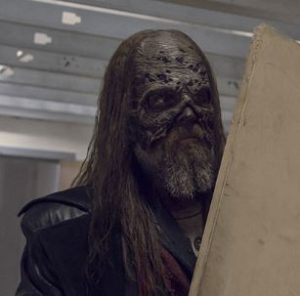 Who Played Beta On The Walking Dead?

Beta entered “The Walking Dead” universe by appearing on the 12th episode of season 9. When the post-apocalyptic AMC show returned with a new installment months later, he was promoted to a series regular.

A villainous character, Beta founded the Whisperers’ creed — he was the first Whisperer. Besides being a great fighter, as seen on the show, he could take in a buttload of pain.

Loyal to Alpha who gave him his name, Beta always donned a mask (previously owned by a close friend). It was Alpha who conceived him to sport the mask and walk among the dead.

For about 24 “The Walking Dead” episodes, producers and showrunners successfully managed to hide Beta’s identity and face from the fans. After Season 10 Episode 12 aired, that was no longer the case.

Read till the end and find the name of the actor who plays Beta On The Walking Dead!

How Beta’s Identity & Face Got Revealed?

In the comics, Beta was a popular basketball athlete who appeared in famous car commercials. His identity and face were revealed to the Walking Dead universe after losing to Aaron and Jesus in a battle.

Ever since his introduction in the series, fans seemed keen to know the face behind the mask. In Season 10 Episode 12, Alpha immediately recognized Beta when she lifted his mask. With the sequence, it became evident that he was someone famous.

There also existed clues about Beta’s identity in the place where Alpha discovered him. In one of the photos found in the room, his face was scratched off.

Interestingly, it was in Season 5 Episode 14 of the accompanying show “Fear The Walking Dead” that served as the most prominent ester egg concerning Beta’s identity. At some point in the episode, Daniel drops a record on the floor that later gets stepped on by walkers. On the cover of the record, Beta sported the same hat as worn on the photo above. 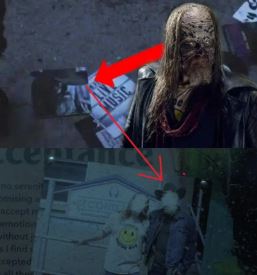 Yes, Beta is a famous Country singer. It would explain why he killed one of the Whisperers who recognized him from his voice.

Who Played Beta On The Walking Dead?

Thanks to the Internet, Ryan Hurst was outed as the actor who had been playing the role of Beta on “The Walking Dead.” Speaking on “The Talking Dead,” showrunner and executive producer Scott Gimple confirmed Ryan as Beta. He shared,

“[The three Walking Dead shows] do share a universe, so where there are opportunities, we want to take them. Even with that album cover [on Fear], it was so funny… I mean just by virtue of the fact that there was a scene with all these records in it, and we knew this shared aspect, we didn’t even want to make that big a deal of it. We just wanted it to exist in there so that people might, deep cut-wise, we were hoping one or two people might notice into the future.”

“It’s just nice, even unto ourselves, between the shows to feel that it’s one world. That said, unlike reality today, these worlds are so isolated from each other because of a lack of mass communications, mass transportation. In some ways, they are on little islands from each other, so when they can have those crosses, it’s kind of wonderful.”

Writing for Forbes, Erik Kain mentioned Ryan as the actor portraying the character Beta in his March 2019 piece. Business Insider’s Kirsten Acuna and Den of Greek’s Ron Hogan had done the same in their respective articles.

According to his 2019 interview with Business Insider, Ryan was the one who asked to be on the show. When his agents sought a role in 2018, the people at AMC declined the offer initially.

Acting since teenage years, Ryan rose to celebrity status portraying roles on “Remember The Titans,” “Taken,” “Sons of Anarchy,” “We Are Soldiers” and “Bates Motel.” In 2011, he won the Satellite Award for Best Supporting Actor – Series, Miniseries, or Television Film.