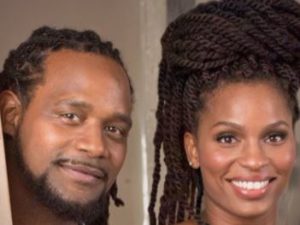 The military veteran couple with keen eyes for homes, Ashley Williams and her husband Andy were the host of HGTV’s inaugural season of Flip or Flop Ft. Worth back in 2017.

After their return from the military, the two decided to turn their real estate investments into a family business. They started their venture in the States and it was only after Ashley’s wish to start a family, the couple realized that there was no going back to military life.

So what was Ashley’s lifelike, aside from her time on the show? Learn all about her over this wiki.

Ashley Williams was reported born in 1985. That made her 36 years of age in 2021; three years younger than her husband Andy.

She celebrates her birthday on January 11 and is of the Capricorn zodiac.

Did you know: It was on Ashley’s 30th birthday (on vacation in Tahiti), the Williams couple was discovered by a TV editor.

Ashley Williams hails from Chicago. Later, after meeting her future husband Andy in the military, she moved to his hometown Texas. The last we saw them, the two were building their Dallas-Fort Worth-based real estate business there.

According to Andy, heritage was important to them. He shared,

“Each community and neighborhood tell a different story, and the chapters are being re-written as we speak. Ashley and I are blessed to be apart of the revitalization process.”

Information on her parents wasn’t available. Also, we couldn’t establish her maiden name either.

Also, she often appeared over Andy’s private Instagram with 5.6K followers. He mostly uploaded motivational quotes and a little promotion of his work over there.

Ashley Williams Net Worth, Career, Flip Or Flop Fort Worth

Ashley Williams’s net worth was under $2 million in 2021.

Talking about her career, Ashley first started as a health care administration bachelor’s graduate. But, instead of further pursuing an academic career, Ashley chose to serve the country. She joined the US Army, got posted to Iraq, and completed three combat tours.

Ashley then came back from the deployment in 2012 along with Andy and decided to turn real estate investments into a family business. Finally, in Jan 2015, she started a residential redevelopment firm called Recon Reality and worked as an executive director there.

Also, she was a board member for REHAB WARRIORS, PBC, and many more.

As of 2021, Ashley established herself as a Brand Influencer, working mom, and veteran advocate. She is also an award-winning designer, real estate developer, and foremost HGTV’s Flip or Flop Ft. Worth’s star. Unfortunately, we might not be seeing more of her over the show as Flip or Flop Ft. Worth season 2 might never be announced.

Ashley and Andy Williams first met in Iraq, as they served in the military.

According to Ashley, she was at the gym when Andy first came out to her and said, “Hey, do you need a personal trainer?” to which she replied, “Uhm, no”. But Andy wasn’t giving up easily, he said,

Reportedly, they were one of the first couples who shared a living quarter (a 200 square feet construction trailer) in the military.

Dating for a few years, the two then held their wedding on August 15, 2009. As of 2021, they were happily married and share two kids named Ashton and Amina. Though the kids were still young, they seemed to have inherited their parents’ keen eyes for homes.

The children were once featured over the show, where Ashley said,

“We like to get their help with sourcing houses. We call it ‘driving for dollars.’”

Later, Ashley shared that they were “very tentative about showing the kids”. Though she was opening herself to scrutiny, she wanted “to show others that normal people can do this.”

Regardless of the viewer’s opinions, Ashley claimed that she was a good mother. Her parenting style included a schedule for everything — “organized play, school time, wake-up time, everything.” She admits that she could be a “control freak” sometimes but she has learned to be “OK with the uncomfortable.”