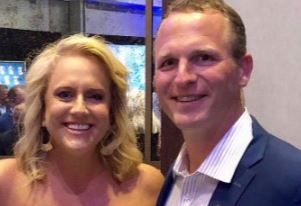 To those unfamiliar: Darian Devries is the head coach of the Drake University’s basketball team, Bulldogs. In 2021, following 8 seasons with the time, he penned a contract extension.

Over this Ashley Devries wiki, read about Draian Devries’s wife including her age, job, and Instagram. Also, find out her maiden name, hometown, and education.

Ashley Devries touched the age of 47 in 2020. Plus, she celebrates her birthday on 17th September.

Born in 1973, Ashley is a Virgo. As a result, she is sensitive, artistic, and reserved nature.

To mention her hometown, Ashley is a native of Eldrige, Iowa. As of 2021, she was residing in Waukee, Iowa.

What’s more, Ashley probably grew up in a religious family. She even placed “Proverbs 3:5” on her Facebook bio. For context, Proverbs 3:5 reads— Trust in the LORD with all thine heart; and lean not unto thine own understanding. [6] In all thy ways acknowledge him, and he shall direct thy paths.

Reportedly, Deb, who survived cancer, is Ashley’s mother. Per earnthenecklace.com, Deb has been a survivor since 2014.

No and Yes. As of March 2021, Ashley enjoyed around 600 followers on Twitter. However, she didn’t seem to have a profile on Instagram. As established earlier, Ashley had a Facebook account. That said, she was less active on the profile.

Back in September 2013, Ashley Devries held the job at the Best Care Pet Hospital. There, she held the position of office manager.

For her 40th birthday, Ashley’s co-workers gave her flowers and a balloon with “Happy Birthday” written on it. She later took to Facebook and thanked them.

Best Care Pet Hospital is an Omaha, Nebraska-based company. Considering Ashley was living in Iowa in 2021, she no longer worked there.

Beyond her work, Ashley loved being on the courtside supporting her husband and their son. Admittedly she also loves all things Christmas.

In 2020, Ashley and Darian DeVries celebrated their 22nd wedding anniversary. Based on this tweet by Ashley, she and Darian have been together since at least they were 21.

In December 2002, Ashley and Darian welcomed their first child, a son named Tucker. 7 years later (in 2009), their second bundle of joy, Tatum arrived.

As of 2021, Tucker was set to graduate from Waukee High School. A top basketball prospect, he committed to Drake University and seemed eager to join his father.