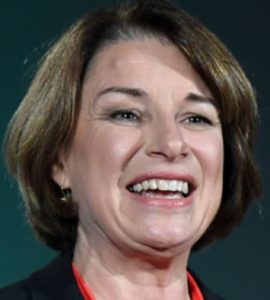 Of all the politicians running for the President of the United States of America, Amy Klobuchar wasn’t the most popular or hopeful one. However, that changed as soon as the Democratic Primaries started and Amy became an overnight sensation.

Read more about Amy Klobuchar, and her unexpected rise during the 2020 Democratic primary.

Amy Klobuchar was born on 25 May 1960 in Plymouth, Minnesota to a writer father, Jim Klobuchar, and school teacher mother, Rose Klobuchar.

From a very young age, Amy was extremely talented and was among the best of her peers. She gained her high school education from Wayzata High School and graduated a valedictorian.

Talking about her religion and religious beliefs, Amy is a devout Christian. To be more precise, she is a member of the United Church of Christ, which is a protestant church that values interfaith relations.

Amy’s church is also liberal in quite a lot of political issues.

Amy Klobuchar started her career as a corporate lawyer and worked as a prosecutor. She was a partner at a couple of law firms in Minnesota, Dorsey and Whitney, and Gray Plant Mooty.

Amy entered politics in the 90s. In 1998, she was elected Hennepin County attorney. In 2006 US Senate elections, Amy got the nominations from Democratic-Farmer-Labor party and went on to win the elections.

In early February 2019, Amy announced her candidacy for 2020 Democratic primaries. In the beginning, she wasn’t among the most popular of the candidates. However, in February 2020, when she came third in the New Hampshire primary, all eyes were trained on her. After that people were speculating her to be the first female President of the United States.

According to Forbes, Amy and her husband shared a net worth of over $2 million.

Coming to Amy Klobuchar’s personal life, Amy married a fellow lawyer, John Bessler. Amy and her husband got married in 1993 and a few years later had a daughter, who they named Abigail.

Previously, Amy’s husband, John Bessler, used to work as a private attorney. Recently, he worked as a professor of law at the University of Baltimore University of Law. Amy’s daughter was also a Yale-graduate-lawyer, who lived and worked in New York City.