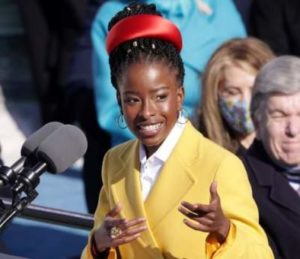 Amanda Gorman became “The youngest inaugural poet in U.S. history” as she recited her poem “The Hill We Climb” at President Joe Biden’s inauguration on Jan. 20, 2021.

While she had already managed decent fame before this, the poet, writer, and dreamer never had the platform as grand as this.

Amanda gave a powerful, five-minute performance after Joe Biden was sworn in. She recited a poem she “had written, in part”, on the day of the US Capitol riots weeks prior on Jan.6. She had managed to write a few lines a day and was about halfway through the poem until the day Trump rioters stormed into the halls of Congress.

And so, she added a verse about the apocalyptic scene, writing,

“…We’ve seen a force that would shatter our nation rather than share it,
Would destroy our country if it meant delaying democracy.
And this effort very nearly succeeded.
But while democracy can be periodically delayed,
It can never be permanently defeated…”

Reading lines that mirrored the theme of the inauguration, “America United” she conveyed the message of the possibility of unity and reconciliation.

As the performance drew to a close, she ended the poem on an optimistic note for the future, appealing to just about everyone listening to her live or online.

Just as her twin sister, Gabrielle Gorman, said Amanda indeed could not have asked for a better person to her twin.

Both the Gorman siblings are supremely talented. While we already know about Amanda, her other half is a dancer and storyteller. 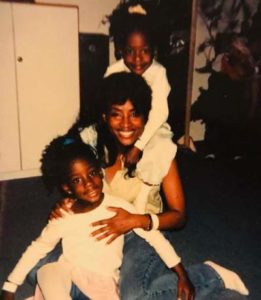 The girls were raised by a single mom, Joan Wicks, and no one knew why their dad was not in the picture. Then again, the KCRA 3 News reported– “Amanda’s dad had little formal education but made sure his children knew just how important it was.”

Brought up in Los Angeles, where her mom teaches middle school, Amanda used to write in journals at the playground at a young age.

In an interview with Study Breaks magazine, Amanda briefly mentioned having three siblings. She was explaining how her mother’s teaching career influenced her.

“My mother worked so hard while raising three kids to get her doctorate and master’s degrees in Education. She inspires me every day to seek higher education not only for myself, but for the other students around me.”

Amanda also has a grandmother, who was not at all surprised to see her granddaughter shine in the inauguration stage. She said she always knew that Amanda “could do this when the opportunity presented”.

Like every African-American person to ever exist, Amanda also underwent racial profiling. Opening about her experience, she shared a security guard tailed her on her walk home. According to the poet, the security guard told her that she looked suspicious.

Standing 5′ 3″ tall, in a yellow double-breasted coat and a red satin headband perched on top of her twisted hairstyle, stood out in the crowd as Amanda Gorman amazed the world. All things she wore, on the occasion, were from the top-notch designers and jewelry, which was, of course, a gift from Oprah Winfrey herself.

24 hours post the recital at Biden’s inauguration, and Amanda was still not able to post anything on Instagram. Because the page was literally flooded with new-in followers from around the world. First, the page hit 1 million followers. When the number was itself astonishing, she never expected it to keep growing. As we write this, it already had a whopping 3.6 million followers.

She was also active on Facebook, with a lesser i.e. with almost 677k followers.

The past years already won her invitations to the Obama White House and to perform for the likes of Lin-Manuel Miranda, Al Gore, Secretary Hillary Clinton, Malala Yousafzai.

For someone who has written for the New York Times, The Edit, and Nike, there’s no doubt Amanda Gorman boasted a $2 million-plus net worth, before 2021.

Her first children’s book Change Sings was set to be released in September this year. And just so you know, sometime around, her official website read: she has three books forthcoming with Penguin Random House.

Speaking of boyfriend, Amanda Gorman has never before been that talkative about this aspect of her life. Even her social media would not give way any clues, at the time.