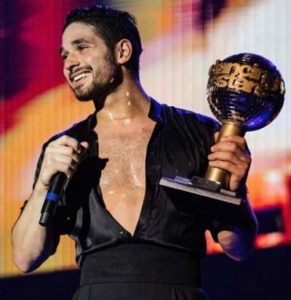 Alan Bersten is an American professional Latin and ballroom dancer. He mostly came in light as the contestant of the tenth season of So You Think You Can Dance.

Circa 2020, he was affiliated to Dancing With The Stars as a professional dancer and choreographer after he was announced the winner of season 28 with his celebrity partner, The Bachelorette star Hannah Brown.

Look further, into the life of Alan Bersten.

Alan Bersten was born and raised in Minnesota in a Russian family.

Not long ago, on the 21st June 2020, his parents celebrated their 34th marriage anniversary. 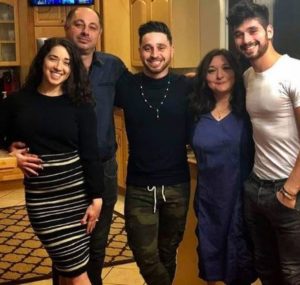 Alan Bersten, with his parents and siblings (PIC: Alan’s IG)

Apparently, Alan is very fond of hid family. Time and again, he cannot help but gush about his father and mother, for having taught to him to be “kind, responsible, respectful, grateful, and to never give up”.

His mother, Raisa Bersten, according to her Facebook profile, worked at Abbott Northwestern Hospital.

Talking about his siblings, his older brother, Gene Bersten is happily married to Elena. His sister, Melani Kane, living in Minnetonka, Minnesota, is the Executive Director at the International Society of Cannabis Pharmacists. She is also married to a man named Matt Kane.

Alan, the youngest of three siblings, is not the only dancer in the family. In fact, his older brother Gene was the one who taught him how to dance. Interestingly, the brothers auditioned together for So You Think You Can Dance Season 10. Alan went as far as the Top 6 Males. Gene, however, didn’t do as well.

Alan Bersten, who started dancing at the age of 7, began his career as a member of the troupe in Dancing with the Stars in season 20 and continued for many consecutive seasons until he made his debut as a professional partner in season 25. Even, until the time of this writing, he continued his affiliation to the show.

For the latest, 29th season, he is to compete again, paired with Disney Channel star Skai Jackson.

Besides, Alan joined the first season of the spin-off series Dancing With The Stars: Juniors as a professional mentor. He had formed ‘Team Alan’ with junior professional dancer JT Church and 10-year-old professional skateboarder Sky Brown.

The University of Minnesota alumni indeed has a lot going on for him at a very young age (age 26, in May 2020).

In the meantime, somewhere around the time, when he went through a tumor-removal surgery, Alan Bersten was reported to have pulled in an estimated $2.5 million net worth.

Does Alan Bersten Have A Wife Or Is He Dating Still?

Heading into season 29 of the celebrity dancing show, Alan Bersten was a single man. There was no evidence the young dancer was dating anyone. Also, he had no wife, for any time before in past, he had not exchanged any wedding vows.

However, over his long stay in the show, he sure made some history and is anticipated to do so in the coming days.

Throughout the 28th season, fans had speculated romance of something of sorts between Alan Bersten and Hannah Brown. The pair, despite landing some disappointing scores and critiques in the beginning, had implausibly sharpened their game and won the Mirrorball trophy.

Time and again, after the win, they have been insisting that their relationship was/is platonic and not that of a romantic partner.

Hannah, who kept asserting that she needed a break from dating, had appeared on The Ellen DeGeneres Show in late 2019. The guest host Justin Hartley had asked her if she was dating Alan. To this, she had immediately answered,

The same way, Alan too kept stressing the words “good friends”, “different partnership” or “friendships” in answer anything relating to Hannah.

Moving on to his affairs in the previous season i.e. on the show’s 27th renewal, Alan Bersten was partnered with model Alexis Ren. This time, he did admit to “developing feelings” for Alexis. The attraction was mutual and they both confessed to one another as the cameras went on. 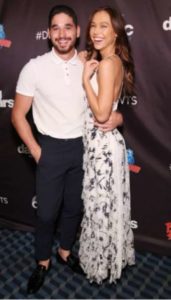 Ultimately, they finished in fourth place and planned to carry on a relationship after the competition ended. But, in December 2018, just a couple of weeks after the season wrapped, Alan and Alexis talks of their split was already going around.

And by March 2019, Alan publicly swore that he would not get involved with his future dance partners. He told US Weekly that he was not in touch with Alexis anymore and promised— “No more showmances for me.”

Not to mention, circa 2016, Alan Bersten had found himself in the headlines, linked to DWTS troupe member, professional fighter and model, Paige VanZant.

For some reason, Alan Bersten is quite popular in The Gay Community. However, based on his inclination towards the community and its welfare, speculation should not be made on his sexual orientation.

Now that with the Dancing With The Stars also considering to cast the same-sex couple, hopefully, we will get to more of Alan who is supportive of people who choose to live alternative lifestyles.

This change in casting is predicted to bring “a different twist” in the dance competition show.