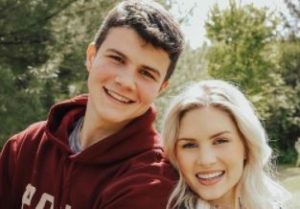 After a year of courting, Bringing Up Bates star Katie Bates got engaged to her boyfriend, Travis Clark in April 2021. The proposal took place in an ocean pier gazebo, decorated with candles at The Reach Key West resort in Florida.

Reportedly, Travis constructed a large heart of red roses and a sign that read, “Will you marry me?”, and also sang a song he wrote for Katie accompanied by a guitar.

So, who is this romantic man, who was able to sway Katie’s heart away? Keep reading this Travis Clark wiki to learn more about him.

Travis Clark was 20 years of age in 2021, the same age as Katie. But in fact, Travis celebrates his birthday on March 9 and is 5 months younger than Katie who celebrates her’s on October 5.

On both of their 20th birthday, the other half took it to their respective IG to say “I love you”. How sweet is that?

As per Travis’s date of birth, he is of the Pisces zodiac.

Travis Clark was born to parents, Michael Thomas and Carla L Clark. They were living healthy at 49 and 46 years of age respectively as of 2021. His father, Mike was an assistant pastor at Solid Rock Baptist Church, and the whole family sang in the Clark Family Band. That made them of the Christian religion.

Apart from singing, Travis’s family also loved to go fishing. Travis’s IG often featured pictures of the catches they made.

Talking about his siblings, Travis has a brother named Mike who turned 22 on Jan 19, 2021, and a sister named Kayla who turned 23 on May 29, 2020. His brother, Mike who labeled himself as a “public figure” was engaged to Deven English, while their sister was leading a married life with Cameron Manaraze.

In 2021, Travis resided in his hometown Berlin, New Jersey.

Before April 2021, Travis entertained 58K followers over Instagram, 2.3K followers over Facebook, and 417 followers on Twitter. Most of his posts over socials featured his hunts, music, and of course his fiancee, Katie.

Also, Travis had a self-titled Youtube channel with 14.5K subscribers then.

The reality star’s fiancee, Travis Clark is a musician. No wonder, he dedicated an original song for her at the proposal. Thanks to his family background, Travis grew up singing at his father’s church. And now the lad’s all grown up, he was paving his way to the music industry.

Involved with his family band, Travis released an album in August 2020 titled, “In God’s Perfect Time”. Go check more of their music at “clarkfamilymusic.com”, or over iTunes.

As of 2021, Travis’s net worth was under $100 thousand, and he had yet to write his solo music. But he was halfway there. With his dream home studio set up in May 2020, he was already playing with the tunes.

In light of his education, Travis and all of his siblings went to a private school.

Travis Clark And Katie Bates began courting after they were introduced by mutual friends in June 2019. The first month, the duo talked over the media and maintained a long-distance relationship. Finally, they met first the first time at a church event in Travis’s hometown.

The duo then traveled around for 9 months before making their romance public in March 2020. A year later, Travis and Katie were engaged on April 7, 2021, and moved on to their “long-distance” thing. Katie was then living in Tennessee with her family while Travis in New Jersey.

Guess, the lovebirds have to wait until the wedding to be together again.

Just in case you are here as a fan of Travis, and don’t know who Katie is: She is the eleventh child of Gil and Kelly Jo Bates, and one of the stars of Bringing Up Bates. Her family was as much of a Christain as Travis’s family was, and Katie even enrolled in a one-year Bible program at Crown College of the Bible.

Overall, Travis and Katie were a match made in heaven. Both believed in Christ, loved to sing, and looked best together. Katie even called Travis her “best friend”.