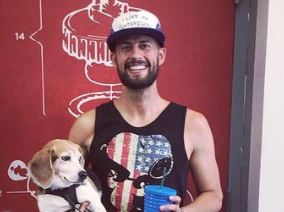 Ryan Fischer is a renowned dog walker. He rose to fame after crooks shot him while trying to steal Lady Gaga’s dogs.

In this Ryan Fischer wiki, read about the popular dog walker’s facts such as his age, family, and height. Likewise, discover his Instagram, dating/married status, and more.

On the 24th February 2021 night, Ryan was walking Lady Gaga’s three dogs when a four-door white sedan pulled up. Two people hopped out of the vehicle and jumped him.

The brutes then tried to steal the dogs. For his part, Ryan fought them before one of the thieves pulled out a semiautomatic and fired a shot at him.

As Ryan lay on the ground screaming for help, the perpetrators grabbed two dogs and fled in the vehicle. When the locals ran to his help, Ryan revealed that the stolen puppies belonged to Lady Gaga.

Thankfully, Ryan didn’t succumb to the gunshot wound and lived to tell the tale. After the first responders rushed him to a local hospital, he began his recovery process.

According to Page Six, Ryan had Lady Gaga’s support. The “Born This Way” singer, who was still busy filming in Rome, has known the dog walker for years. She first appeared on his Instagram in September 2015.

Distraught with the news about her dogs, Lady Gaga offered a $500K reward for the safe return of Gustav and Koji, no questions asked. The decision drew criticism from many including an ex-FBI agent Frank Montoya Jr.

Opening up in March 2021 via Instagram, Ryan revealed his lungs collapsed several times after the shooting. By then, he was recuperating at home.

In March 2021, Ryan Fischer turned the age of 40. Born with the zodiac sign Pisces in 1981, he celebrates his birthday on 4th March.

On his 36th birthday, Ryan shared a selfie with a dog. In an accompanying caption, he wrote— “Can I really be 35 already, Stella? Time just flies at the speed of light.” “35?! Huh, I was certain you were much older than that. So… Go you?”

Ryan was born in Cincinnati, Ohio. However, he listed Huston, N.Y. as his hometown. In recent years, Ryan called Manhattan his place of residence. As of 2021, he was reportedly living in Los Angeles.

According to an IG post dated back to Sept. 2015, Ryan’s mother kept a framed photo of him sitting next to a dog on her bookshelf.

A family man at heart, Ryan enjoys his status as an uncle. Sharing a photo of his niece and nephew on IG, he once wrote— “What kind of uncle would I be without encouraging at least a bit of mischief?”

Based on his photos shared on Instagram, Ryan can’t be taller than 5 feet 9 inches. Moreover, Ryan’s flamboyant fashion sense and perfect beard are his distinct features.

Find Ryan Fischer on Instagram with the username @valleyofthedogs. As of Feb 2021, he had more than 1K posts and 4.1K followers. Unsurprisingly, Ryan’s IG consisted of him walking dogs. As everyone can tell, he really loves the animals.

Ryan is also on Facebook. By Feb 2021, he had amassed over 600 friends on the platform.

Dog walkers, according to a quick google search, don’t require a set of academic qualifications to work for a company. However, one should be familiar with animal aid.

Circa 2010, Ryan began his career as a dog walker. Reflecting on his 5-year-long journey via an IG post, he wrote— “I realized this week it’s my 5th anniversary of dog walking. I’m still amazed at how I happened into this world as a very confused, broken, sad person, and, through the dogs and the people I have met, have become a more complete, happier man.”

He continued— “Being greeted by love every day and happy faces have given me confidence and sense of self I had forgotten… Or never even knew I had in the first place! It has exposed me to endless possibility and belief, allowed me to leave a horribly controlling and manipulative relationship, discover and rediscover friendships, and allowed me to voice my desires for my life.”

Ryan then continued— “Every dog has been a gift, and each one has given me a lesson on life and myself. I am just as grateful to see them each day as they are happy to see me. Every day I am thankful for this life!”

Working as a dog walker in Los Angeles, Ryan makes more than $37K every year. Meanwhile, in New York, he should earn around $38K annually.

As of Feb 2021, Ryan Fischer’s social media was devoid of anyone who could be his significant other. Thus, we couldn’t tell for sure if he was a married man or still dating.

In June 2014, Ryan shared a photo of him celebrating the “pride” with two others on Instagram. While the post alone isn’t enough evidence, many believed he has been an openly gay man.