Meet Ruby Quilter, popular as the girlfriend to the Will and Camelot star, Jamie Campbell Bower.

In 2021, Jamie was all set to become a recurring cast in Netflix’s Stranger Things. He reportedly will be portraying the role of Peter Ballard, a caring man who worked as an orderly at a psychiatric hospital.

But today, we aren’t talking about him. Rather get to know all about his girlfriend over this Ruby Quilter Wikipedia.

Ruby Quilter was 29 years of age as her boyfriend Jamie was set to appear on Stranger Things in 2021.

Unfortunately, we couldn’t find her birthday. So, her zodiac wasn’t known as well.

Just in case you’re curious, Jamie is 3 years older than Ruby. He celebrates his birthday on November 22, making him of the Sagittarius zodiac.

Ruby Quilter stands tall at a height of under 5 feet 9 inches. She is a little shorter than Jamie who is 6 feet (183cm) tall.

Mentioning her distinct features, Ruby has blue eyes and a body covered with tattoos.

Ruby Quilter was raised in her hometown UK, from where she started her tattooing career.

Information about her family was unavailable.

As of June 2021, Ruby entertained 59.3K followers over Instagram, and 323 followers over Twitter. Most of her posts then were filled with pictures of her tattoo jobs. But every once in a while she flaunted the carvings on her body as well.

So, what is her job? Well, Ruby is a professional tattoo artist based in Los Angeles, CA (previously London, UK) who specializes in single needle black and grey tattoos. Her works included a lot of classic art, portraits, floral work; inspired by “renaissance art, neoclassicism, and the pre-raphaelites”.

Curious about how much a tattoo artist made in Los Angeles, CA? Reportedly, they made around $100 thousand per annum.

As for how she started, Ruby shared that she started getting tattooed at an early age, and it “sparked something” in her. But at the time, she never considered tattooing as a job. “Being a female tattooer had some social connotations”, she added. However, Ruby decided to look for an apprenticeship and worked in a shop called Scarlet Rose in the UK.

Over time, taking inspiration from other tattoo artists like Jack Rudy, Kari Barba, Juan Puente, Freddy Corbin, and many others, Ruby shaped her place into the community. Although it has been an uphill battle for Ruby navigating through a predominantly male space, she made her way to “success”. And what “success” meant to her having “clients to tattoo and ideas to convey.”

Apart from her style, Ruby someday hoped to get more into fantasy. Also, she added that she would love to take on “larger projects”, and “do some back pieces.”

Did you know: When Ruby was not tattooing, she painted oil figurative work.

Ruby Quilter first came to be rumored as Jamie Campbell’s girlfriend back in May 2019. At the time, fans noticed that Jamie had just started liking Ruby’s IG photos, and they even recognized Ruby over Jamie’s IG post a few weeks later.

Moreover, Jamie had just got a new tattoo then, which he flaunted over Snapchat and tagged her. Do we need to say more?

So, although the duo never actually confirmed that they were dating, almost everyone was convenient that the pair was in a relationship.

But it seems that the duo met a year before their relationship came to light. On November 8, 2018, Ruby Quilter and Jamie were spotted together at the UK premiere of Fantastic Beasts: The Crimes of Grindelwald held at Leicester Square, London.

The last we’ve heard of them was in November 2020. So, it is unclear if they were still together or not. 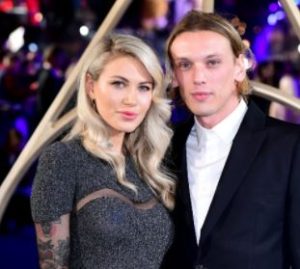 Little info about Jamie Campbell: He is an actor popular for his roles as “Skiff” in Thomas the Tank Engine & Friends (2020), and as “Christopher Marlowe” in Will (2017). If that doesn’t ring a bell, you might have obviously seen him in the Twilight and Harry Potter movie franchises.

Before Ruby, he was dating his The Mortal Instruments costar, Lily Collins. The two began dating in 2012, broke up a year later, and got back together in 2015, and again split later that year.

They were rumored to be dating again in 2018.