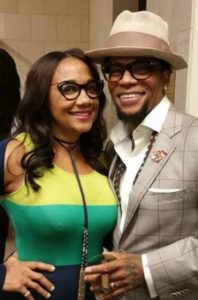 Comedian DL Hughley and his wife LaDonna Hughley stood the taste of times when it comes to their marriage. After being married for a little over three decades, the couple is going strong together as ever.

When the news of DL having a mistress and cheating on his wife stirred mainstream entertainment news portals, everybody turned their heads toward LaDonna’s take on that. But after the couple’s story regarding the events, everyone admired her gestures and effort she made to protect her marriage.

This wiki-article delves into the life, job, and a few other details, so delve right in to learn more about her.

Per her date of birth, she occupied Taurus as her zodiac sign.

Ladonna Hughley was born to her father Kenneth Ray Murphy and her mother Annie Marie Murphy. As it appeared, her parents separated while ago with no disclosure of the reason behind the split.

Starting in 1916, racial discrimination and poverty hit the Northern states of the US. During that time The Great Migration from 1916 to 1970 set off which led to the migrations of millions of African-Americans to the north. And in that transition, a 6-year-old boy from Louisiana, Kenneth Ray Murphy, moved with his family.

LaDonna’s father spent most of his life in Los Angeles. He only returned to his home state in 2018 with his daughter.

As for her mother, she had a job as an electronics instructor, training women to assemble electronics as per the direction of NASA. What’s more, she is also a registered nurse.

More on her family, Lisa A Murphy, her sister is the possible siblings she has to date.

More on LaDonna’s distinct features, she flaunts her short straight hair that goes well with her well-maintained body measurements of 37-28-38.

Soon after Ladonna’s association with Darryl Lynn (D.L.) Hughley made headlines, her prominence grew across the states in the states. Along with that, her social media grew to somewhat an attractive figure.

At the time of penning this piece, her Instagram account which was set on private garnered her a total of 5785 followers. Likewise, she also configured the same setting on her Twitter account @mrslhughley which had 174 followers at the same time.

Additionally, she also has a Facebook account that sheltered her private life. She last posted on the account on 4 June 2020 in favor of the #BlackLivesMatter movement she participated in.

Though LaDonna Hughley gained wider popularity as a spouse of comedian D.L Hughley, she also shared a spotlight in fame in her own right.

In 2013, LaDonna worked as an executive producer in a short documentary named Colored My Mind. She also held the job title of associate producer on the same.

Whereas in 2018, LaDonna appeared as herself in a TV documentary series, Black Love. She reportedly appeared on four episodes of the series.

Besides that, LaDonna played a huge role in the career success of her husband. She received credit in DL Hughley: Goin’ Home in 1999 for the TV special documentary.

As her Job of TV producer bloomed, her net worth also saw an astounding growth. As of June 2020, she bagged an approximate net worth of $450,000.

LaDonna Hughley and her husband tied knots on 22 February 1986.

Following their marriage, the pair went on having two daughters: Ryan Nicole (b. 9 Feb. 1987) is Atlanta-based food writer and Tyler Whitney (b. 25 April 1991) who works in Reach Media Inc.

Kyle Aaris, the youngest of the bunch (b. 6 December 1988) was diagnosed with Asperger’s syndrome as a young boy. Both the comedian and his wife contributed from their side to grow awareness of autism because of him.

Despite their married lasted for over three decades, the Hughleys faced several challenges regarding their marital relationship. The comedian had a baby boy from his affair with an anonymous mistress of his. While he cheated on his wife, the secrecy surfaced with a tragic turn of event.

The child he had died as his mistress’s boyfriend suffered him a brain injury. As he knew if he spoke about it to his wife, their marriage would certainly meet its end.

However, DL manned himself up and admitted his doing and shared his tragic loss with LaDonna, to which she replied that he should’ve shared his loss with her early on.

But after his mistress ran into financial trouble he asked LaDonna if he could support her. Immediately after that, LaDonna got in touch with his mistress and she started paying her.

Fans of DL Hughley admired her generosity and her effort to save the couple’s marriage after hearing the story.

When Shevon Nieto stepped on the stage of America’s Got Talent, she first surprised the judges with her...