Home EntertainmentKataluna Enriquez Wiki: As A Man, Before Transition

Kataluna Enriquez Wiki: As A Man, Before Transition 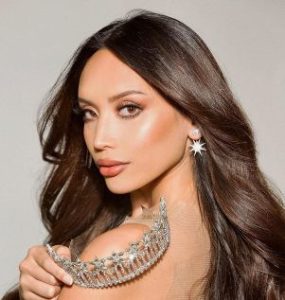 Kataluna Enriquez is a transgender beauty who is set to compete in Miss USA and maybe even Miss Universe. Since she won the Miss Nevada title, she will be representing the state in the pageant.

Ever since her win, fans are eager to know more about her personal life. Delve into this Kataluna Enriquez Wiki to learn more about her.

Kataluna Enriquez As A Man

Kataluna Enriquez hasn’t shared any photo of her as a teenager before she transitioned. But, there exist a snap of her probably in her primary when she was a kid. 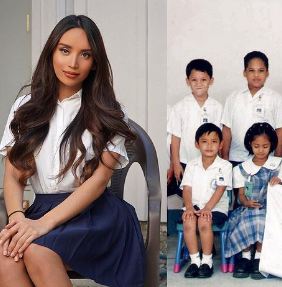 Kataluna as a young boy, the first kid from the bottom row (Pic: Kataluna’s Instagram)

There doesn’t seem to exist any photo of her as a teenager. Even if it existed, she hasn’t shared the photo publicly.

As per Kataluna’s interview with Cosmopolitan, she started transitioning in her freshman year of high school when she was 14. She cited Laverne Cox as her hero after seeing her 10 years ago on #transformme.

It was before Kataluna started her transition, and she inspired her to transform and she always looked up to Laverne. In her own words, ” I was so scared to talk to you, but when our eyes locked and you approached me with a compliment, it was honestly one of the most magical moments for me. Another dream come to life. Thank you @transnationfestival for the unforgettable night.”

Kataluna Enriquez celebrates her birthday every year on 26 April. She turned 28 years old in 2021. Moreover, she owned Taurus as her zodiac sign.

As Kataluna shared with Cosmopolitan, she came from a broken family. As she stated, “so my mom was somewhere else and my dad was not easy to deal with. There were times when I felt more at home at school than at home. I would dress like myself at school and then change into sweatpants before going back home.”

Due to the troubled environment in the home, even though Kataluna was bullied in school a lot, she felt at peace at the school.

Kataluna Enriquez is of Filipino-American ethnicity and came from a very religious Catholic background. She was the only son in the family so it was a lot of pressure for her.

Furthermore, her father didn’t even accept her until 2013.

As for Kataluna’s siblings, she has two younger sisters Peggy Renee Enriquez and Pauline D Enriquez. Both of her siblings are often featured on her social media.

Kataluna Enriquez stands tall at a height of 5 feet 8 inches (1.72 meters). Whereas, she weighed 56 kilograms (125 lbs). She has dark brown hair, wears green contacts, and is blessed with measurements of 35-27-36 inches.

Social media is playing a huge role in Kataluna Enriquez’ss personal life and her business. Her Instagram @mskataluna with 35.6k followers. On the platform, she posted a total of 382 times as of 28th June 2021.

In the same way, Kataluna is also on Facebook with 9802 followers. She is very active on the platform and it holds a lot of information.

Kataluna Enriquez earned wider recognition after she started competing in beauty pageants. She secured several titles. The glamorous and success that she exuded on stage was a facade that hid what she had dealt with the same amount emotionally, mentally, and physically.

However, Kataluna rose above it all and accomplished greater things, becoming an icon for her fans, family & friends, and the transgender community.

Kataluna attended San Leandro High School and graduated in 2011. She enrolled in the Fashion Institute of Design and Merchandising in Las Vegas where she studied fashion designing.

In 2016, the Fil-Am stunner started her own fashion brand titled Kataluna Kouture. She secured the title of California in Transnation Queen USA in the same year. She also competed in another pageant, Miss International Queen 2018, and made it to the Top 12.

In Miss California USA in 2020, Kataluna represented Hayward. Plus, she started working at LGBTQ Health Care as a healthcare worker. After her win in Miss Nevada which was held in Las Vegas, she qualified for Miss USA which was set to be held on 29 November 2021.

Kataluna beat 21 other candidates to represent Nevada in the upcoming Miss USA pageant.

According to CNN, if Kataluna wins, Miss USA title she will be the second trans woman to join the Miss Universe pageant after Spain’s Angela Ponce in 2018.

As stated earlier, Kataluna Enriquez’s father only accepted her after 2013 and it was because of her dating life. When she started bringing her boyfriends into her home, her father came to a realization.

As Kataluna shared, “Someone loves and accepts her. Why can’t I accept my own child?”

In 2016, Kataluna shared about still getting depressed after all those years. Though her depression was rooted in her having no support, her identity, or self-love. But, once she had a partner he helped her with that.

Speaking about her boyfriend, Kataluna shared: “He taught me to love myself; he showed me that I am beautiful. It took me a while to accept that. No one in my family ever told me, ‘Oh, you look beautiful.’ When he started showing me love, I felt complete. It changed my whole attitude. I’m more positive, more caring. I finally started accepting myself because someone accepted me.”

But, it was almost 5 years ago and the whereabouts of her relationship status is still anonymous. Kataluna never featured her boyfriend on her socials, or at least in a recognizable manner. So, her current situation about having a partner remains obscure.

One Reply to “Kataluna Enriquez Wiki: As A Man, Before Transition”