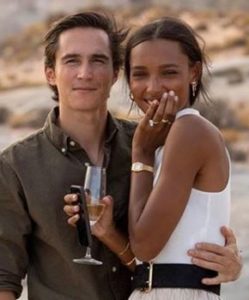 Snapchat’s partnership director Juan David Borrero finally became engaged to his supermodel girlfriend Jasmine Tookes of four years. Jasmine took it to her Instagram to share the happy news and fans flooded her social media platform to congratulate the couple.

Plus, the ring became the focal point of the moment they shared together. In addition, Juan’s information is also limited as of 2020. But we’ve put together this wiki-article to help readers know him better.

Juan David Borrero was born in June of 1990. He turned 30 years old while celebrating his birthday in June of 2020.

However, the lack of a precise date of his birth restricted stopped us from letting know his zodiac sign. But since people wished him a happy birthday on June 15, on his Facebook profile, that would make him a Gemini.

Juan David Borrero was born to his anonymous parents in Quito, Ecuador. While his mother starred in a few social media posts of his, no other information on his parents has appeared as of 2020.

Moving on, Juan grew up with his sister Juliana Borrero. As her social media account suggested, Juliana is a lover of surfing. Moreover, all members of the Borrero family are very close to each other.

One looks at Juan’s gorgeous mother and one can tell where the Borrero siblings got their looks from. Plus, the family’s sense of unparalleled style makes them stand out.

Juan David Borrero, who is only an inch shorter than his girlfriend, stands at a height of 5 feet 7.5 inches (1.71 meters). That certainly made him look dashing on his own right.

Plus, his strong eyebrows and dark hair make people think that if Juan wasn’t building a career in the tech industry he could try his luck to be a model. Plus, he doesn’t have a bodyweight more than 65 kilograms (143 lbs) which helped him avoid looking fat.

Now for social media reach, Juan flaunts his verified Instagram account with 38.1k followers at the time of penning this wiki. Likewise, he is also on Facebook with limited activity. He absolutely stopped posting videos since August of 2014.

Before getting into his job, Juan David Borrero attended Stanford University. He joined the university in 2008 and graduated in 2012 with a bachelor’s degree in arts while he majored in economics & international relations.

Soon after Juan graduated, Juan joined Bank of American Merrill Lynch. He served the company as a sales & trading analyst. After working for 1 year and three months, he quit his job at Merrill in September of 2013.

Following that, Juan started his job at Snapchat as the 23rd employee of the company. He focused on running fundraisers and product launches. He also managed relationships with right holders worldwide. Juan was working as a director of international market at Snapchat as of 2020

Juan was also credited for his contribution to having a partnership with International Olympics Committee and FIFA for the Olympics and World Cup. About 80, 81 million viewers watched those events from Snapchat which generated a huge income for the company.

Being in the pay-roll of such a huge enterprise also has perks of its own. Not only Juan received several benefits and allowances, but he also made at least $120 thousand in salary per year.

And this amount cumulated together has definitely made Juan David Borrero’s an approximate $7 million dollars in net worth.

Juan David Borrero took his model girlfriend Jasmine Tookes away for a short outing to Lake Powell. As a man who always has a plan, he popped the big question while showing an oval-shaped 7-carat ring by Ritani.

And within a few moments, the couple got engaged with each other. Posting a moment from their engagement, Jasmine took it to her Instagram to announce that she and her boyfriend are engaged.

Jasmine showed her lavish £190k ring which denoted that she is off the market. She captioned the post with, “Si, mi amor! ♥️ We’re engaged!!!.”

The Victoria’s Secret model went on posting other pictures from the serene moment they spent together. She and Juan were dating each other for four years starting from 2016.

But the one thing that couple definitely missed sharing was the plans and date of their wedding. So, until they announce the big day, stay with us to get updated with any development.

Head Instructor and Vice President of One Peloton, Robin Arzón announced her pregnancy on her Instagram...

In 2020, William Hartigan added another title to his name besides being known as the financial advisor of...