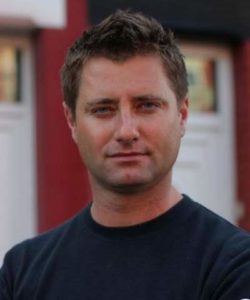 George Clarke is an architect, television presenter, lecturer, and writer, best known for his work on the Channel 4 programs The Home Show, The Restoration Man, and George Clarke’s Amazing Spaces.

Lately, he and the and leading architects were seen transform some of Britain’s most unloved homes in Channel 4’s newest season of Ugly House To Lovely House.

Here’s a detailed-writing including all that occurred, so far, in his personal as well as professional life.

He was born in Sunderland, England, and brought up someplace nearby Washington.

His mother, Anne, worked at Oxclose Comprehensive School, where George studied. Also, his father, a printer passed away when George was only six.

So, his mother eventually remarried. And, it looks like George shares a good enough bonding with his step-dad.

On 31st August in 2020, George shared a memory of his stepdad, who is no longer alive. Via Instagram post, George informed his fans about his funeral, during the lockdown.

So far, we know the sister he mentioned, is not his only sibling. He has two more younger sisters.

What Is George Clarke Net Worth?

TV host George Clarke, specializing in property and interior design programs, is reported to have pulled in over $5 million net worth.

Regarding education, he left school at the age of 16 and found a job with a local firm of architects.

Eventually, he studied for a BTEC in Building and Construction at Wearside College, Sunderland. Then, received First Class BA Honours in Architectural Studies and a Certificate in Architectural Practice from Newcastle University, and eventually a post-graduate diploma from London’s Bartlett School of Architecture.

As he was studying, George supported himself financially by renovating people’s homes

Following the graduation in 1995, he and his business partner Bobby Desai formed their own company clarke:desai years later in 1998. Circa 2011, George left the joint venture to set up his new company George Clarke + Partners.

It was by chance that television happened to George. He had approached a literary agent after being asked to write a book about architecture. Later, the same agency, which also had been representing TV presenters, asked George to test for a new Channel 5 program Build A New Life in the Country. He not just got the job but also landed two more property shows.

Ever since (2004), George has been the main presenter for the shows including Property Dreams, Dream Home Abroad, The Home Show, The Great British Property Scandal, George Clarke’s Amazing Spaces, Old House New Home, and Ugly House To Lovely House.

All along he never stopped exploring the author in him, penning several books including Home Bible (Orion), and Build a New Life: by Creating Your New Home.

Who Is George Clarke Wife, Katie?

George Clarke has been married to his wife Katie Clarke since September 2018. And they lived in lives in Notting Hill, West London. The wedding ceremony was a romantic getaway to Ibiza joined by their friends and family. 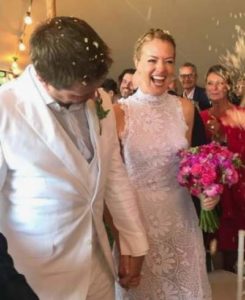 Katie, with the maiden name Morgan Jones, is a brand marketing and comms consultant working for Assassin Communication. As part of the job, she was to deal with all clients in the Luxury Fashion and Wellness brands.

She graduated from the University of the Arts London and pursued a career as a stylist, assisting Edward Enninful at W Magazine. Soon, she became the highly sought-after freelance stylist for leading magazines including I-D, Vogue Italia, and Dazed and Confused. Not to mention that she also worked for Giorgio Armani and Louis Vuitton, and was “headhunted” to become Head of International PR and Marketing for Lulu Guinness.

It might come as surprising to some– that the London born and bred actually happens to be George’s second wife.

George Clarke was previously married to Catriona Drummond who worked as an art director. The couple was married for over a decade. Raising three children for a while, they separated in 2013 and also eventually got divorced. The kids are named Georgie, Emilio, and Iona.

The estranged pair had started dating after George met the Spanish national when he had undertaken the renovation work for her brother.