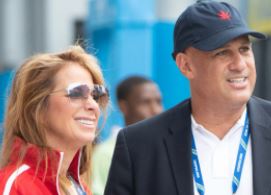 On 6th October 2020, the former Real Housewives of New York City star, Jill Zarin shared a picture over Instagram with her boyfriend, Gary Brody, all dressed up at a wedding.

But Jill clarified that she wasn’t married and was at her niece’s wedding in Westport. Also, she added that she “would wear a white dress!” if it was her wedding.

Seems like the Jill was now ready for the “white dress” again, though she previously shared that she wasn’t so sure. And the man in the groom’s suit would certainly be her boyfriend, Gary Brody.

Lets us take a look at his personal life over this wiki-style article.

Corresponding to his birthday, Gary is of Libra zodiac.

According to “mylife.com”, Gary Brody was raised in his hometown, New York.

Talking about his distinct features, Gary is a handsome bald man with brown eyes.

As for his job, Gary Brody mentioned himself as a consultant.

He worked as a Sales Specialist in Simple Suit Company in 2020. Before that, he was the president of a men’s clothing company called Marcraft Apparel Group for 28 long years (from 1991 – Jan 2019).

Gary Brody’s net worth as estimated to be $10 million in 2020. Just in case you don’t know, his girlfriend, Jill Zarin’s net worth was a stunning $35 million then.

Furthermore, he as a degree in BS Marketing/ Transportation Distribution Management from Syracuse University.

“NYC lifer, dad, tennis hack, and fashion exec. Figuring out where the next shoe will drop.  Trying not to trip on my own laces.”

Gary Brody didn’t take much about his ex-wife. All we know his he has two kids named Daisy Brody and Riley Brody from his past relationships.

However, it’s not confirmed that his kid’s mother is his ex-wife.

Also, information on his marriage and divorce remained unknown.

But they made things official in December 2018 through Jill’s Instagram. She uploaded a picture after playing tennis with Gary and wrote,

“What is the origin of the term Love in Tennis?”

Also, Gary and Jill bonded over their love for tennis. They played tennis almost every day at the time.

Before they went official, the duo was first seen in summer 2018 attending Wimbledon together.  Jill even left some flirty comments on her new date’s Instagram photo after the match. To which, some fans seemed disappointed saying it had just been just 6 months that her husband died and she was already dating.

If you don’t know, Jill lost her husband, Bobby Zarin to Cancer in January 2018. Also, she was married twice; to Bobby in 2000 and her first husband, Steven Shapiro in 1987.

The death of her ex-husband was also the main why Jill fell in love with Gary. She shared, Gary was there for her at her difficult time. Moreover, Jill was convinced that even her ex-husband, Bobby “would have approved” of him.

Apart from this, Jill shared that she could see her herself marrying Brody someday. In her words,

“We’ll get married at the right time. We’re not engaged yet.”

And went it came time to the wedding, Jill insisted on making sure it would be a “simple” bash.

Contradicting her statement, “Screenrant.com” mentioned Gary to be Jill’s fiancee then.

As of 2020, Gary and Jill lived in together at Gary’s penthouse; formerly owned by painter Georgia O’Keefe.

Sarah McSweeney is a self-described model, chef, and advocate. She first came to limelight as she was invited...