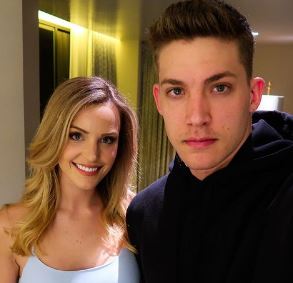 NBA star player Meyers Leonard has been recognized as one of the humble ones in his game hailing from Illinois. However, his spewing racially offensive slur in a Twitch stream put the love of his life, his wife Elle Leonard in trouble in her socials.

Elle has been receiving backlash on TikTok and generated attention from people who didn’t know her before all of this. Ever since the incident, the witness of the drama and ruckus wanted to know more about Elle Leonard. So, here it is, Elle Leonard Wiki!

Elle Leonard celebrates her birthday every year on 15 January. She turned 29 years old in 2021.

Elle Leonard, maiden name Elle Bielfeldt, was born to her father David Bielfeldt and her mother Julie Bielfeldt in her hometown of Peoria, Illinois, the United States. David and Julie married in 1984 and have been happily married ever since. On 29 September 2013, Elle shared a picture of her father sitting on a booth which also happens to be the same booth her parents had their first date, in the basement of KAMS.

Her parents at least have a total net worth of $6 million of which they built a huge mansion with a cost of $4.25 million in their hometown of Peoria, Illinois.

Moreover, David is the son of prominent Peoria philanthropists Gary Bieldfeldt and Carlotta Bielfeldt. Talking about other family members, Elle grew up with her three siblings, Matti Bielfeldt, Lydia Bielfeldt, and Max Bielfeldt.

Growing up Elle Leonard was a little chubby and definitely wasn’t the cutest. She was an athlete playing varsity sports. However, she has lost as much as 35+ pounds of body weight and weighed almost 58 kilograms (127 lbs). For that, she started the diet but she mostly depended on exercise.

“Sweating is my version of self-love.
Soreness is my source of validation.
Fatigue tells me that I’m not done getting better.”

Moreover, Elle Leonard stands second to the last when it comes to the tallest in the family, just above Lydia. Even though she stood at a height of 5 feet 10 inches (1.77 meters), she is still smaller than other family members who are over 6 feet tall.

Whereas, Elle is blessed with measurements of 34-25-35 inches.

Moreover, Elle is also on Facebook with where posts occasionally and it shelters a few personal details related to her life. Furthermore, she was also on TikTok with 528.4k followers at the same time.

Starting this section with Elle’s academic qualifications, she attended the University of Illinois at Urbana-Champaign. While there, she studied advertising and earned her bachelor’s degree in the same.

Elle graduated with a 3.73/4.00 G.P.A from the university where she was also a member of Alpha Phi Sorority (vice president of Chapter Operations 2011-2012) and was also involved in the American Advertising Federation (Midnight Oil, an account manager (2012) and On The House, Team Member, (2011).

Elle also joined BurnCycle as Spin Instructor in 2015 and quit her job in 2018 in Portland, Oregon. In December of 2017, her interest in blogging blossomed so she founded Elle Leonard Blog. She also founded Leonard Legacy Foundation where she serves as an advisor from February 2018.

But most of all, Elle is recognized as co-founder and the CEO of Level Foods since November of 2017. As the story goes, Elle started the company to help her husband with his diet schedule. As a lover of cooking, she cooked power bars herself and served them to her husband. But, as the demand increased she went full-fledged and started her own company.

While not caught up in the hectic schedule, Elle finds time to cook something healthy for her husband. And she loves basketball and definitely got some serious skills which she shows-off on her socials, as she was also a basketball player herself. She also earned a certificate from National Basketball Players Association (NBPA) in 2018.

As for the net worth, Elle personally sits comfortably on a fortune of $600 thousand. Whereas, her husband Meyers Leonard signed a $41 million contract with Blazers.

Elle Leonard and her NBA star husband, Meyers Leonard started dating when she was only 19 years old. The love birds have been with each other ever since they met each other for the first time in an arena in a basketball camp. But she was also friends with the girlfriend of one of the senior basketball players, Mike Davis.

Almost 4 years since dating each other, a few days after her college graduation, Meyers proposed to Elle and asked her hand for the marriage.

On 30 July 2015, Elle went on her Instagram to announce that she almost forgot to wish each other the fourth anniversary since they started dating. Plus, she wrote,

“Wedding planning was so busy yesterday that Meyers and I forgot to wish each other a HAPPY FOUR YEARS!
T-minus 3 days till I marry this amazing man. All THREE of us cannot wait to celebrate with everyone! #MeetTheLeonards”

On 3 August 2015, Meyers and Elle tied the knot in front of their loved ones. The couple each other in an outdoor wedding in a beautiful setting. Five years later in August of 2020, Elle wished her husband their 5th anniversary.

In September 2020, Elle shared a few details on their marriage. She shared that even after being married for 9 years at the time, Meyers always left love notes to her, displaying his romantic side and a soft spot for his wife. However, neither of the pair has ever discussed the two having kids any time soon.