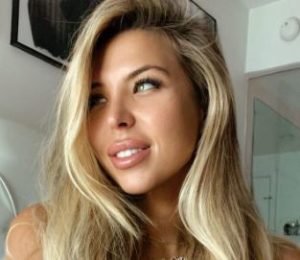 Pope Francis blessed people in many ways. And by “many ways”, we mean it literally!

In Nov 2020, a racy Instagram model Natalia Garibotto received a “blessing” from Pope Francis after his IG account liked a steamy photo of her. She shared that the scandal gained her over 600,000 followers and the cash was flowing in.

So, who is this fortunate IG sensation, who stood in the limelight after the papal publicity? Here is a short bio we’ve prepared just for you.

Considering the Pope’s standing, many found it had to believe that the head of the Catholic church would like Natalia Garibotto’s raunchy IG post. Thus, the majority of people assumed that it was most likely a hack or a glitch.

Also, the Vatican officially launched a probe to figure out the original cause for the “like” on Natalia’s photo. Moreover, it wasn’t clear if the alleged “like” was quickly deleted or it wasn’t real at all.

As for Natalia’s say on the matter, she seemed happy with the incident overall. She added humor to the mix and wrote,

“Brb on my way to the Vatican. At least I’m going to heaven. If Pope Francis wanted the site, so should you.”

As per her birthday, Natalia is of the Capricorn zodiac.

From Sao Paulo, Brazil, Natalia Garibotto might be of Latino ethnicity.

She comes from a religious family and often attended church. Her mother, who didn’t approve of what she was doing, was also petrified after seeing the Pope’s like. Natalia took it to her Twitter to make a joke about it,

“My mum may hate my ass pics but the Pope be double-tapping.”

In light of her education, Natalia attained Miami Country Day School from 2007 to 2011. Later, she joined the University of Miami -School of Bussines for BBA from 2011 to 2015.

Natalia Garibotto is open about her plastic surgeries. She confessed that she has had a nose job and a boob job. Reportedly, her nose job was done by Dr. Marcelo Ghersi.

The reason why Natalia prefers cosmetic surgery is to look like what she looks over the pictures. She shared,

“I have had so many girl crushes on Instagram who when you meet them in real life they don’t look anything like their photos. Because Instagram demands perfection, sometimes I feel like I want to get my nose done or have fat transferred to my butt.”

Also, her TikTok had a 1.1M following and Twitch had 60K followers.

Natalia Garibotto’s net worth was over $2 million in 2020. Her earning could mostly be credited to her Instagram popularity and Twitch streams. Reportedly, she earned  $30,000 a month.

And with Pope’s scandal, Natalia was earning more than ever. She had more leverage” on brands and sponsors were flooding in. She endorsed brands like Manscaped, Beijo baby, Tiger Mist, and even became a summertime top Fashion nova partner.

Before Natalia set her career as a social media influencer, she worked as an assistant dictator for G&C Legacy LLC. Also, she was the CEO of Natagata.

Natalia Garibotto’s first reported boyfriend was the NBA star Kyrie Irving. The duo was together around 2014. However, it wasn’t clear when or how they broke up.

There once was a rumor that Kyrie cheated on Natalia with two other ladies, Khrystyna Garcia and Su Wu Leone. The gossip came to light after Kyrie allegedly posted a picture of himself with two beauties on his lap via Instagram.

Later, Irving denied any involvement with the picture and tweeted,

Even Natalia spoke up in his support,

“For everyone tweeting at me, nothing is up. Just a couple hoes who need attention and clearly in desire for more Ig and tweeter followers.”

After Kyrie, Natalia was then spotted dating DeSean Jackson. It seemed that the two were first linked together in late 2013. But it wasn’t until 2014, they started spending time and vacationing together.

Like her previous boyfriend, Natalia’s relationship with DeSean wasn’t well known. She even hid her face whenever DeSean took a selfie with her. Could it be that she was ashamed of being seen with DeSean for some reason?

Natalia and DeSean were still dating in 2016.