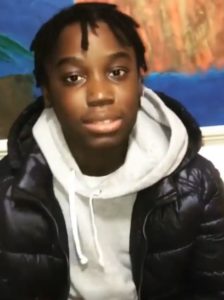 R&B has been a powerful genre of music for years. The expansion and popularity of the genre brought many young artists who were inspired to follow singing as the career.

But the place which produced Hip Hop vets like Jay Z, Big Daddy Kane, GZA, Skyzoo, Joel Ortiz, and young and up and comings like Joey Badass, Flatbush Zombies, Capital Steez, and The Underachievers, it was rare for young aspiring artist Melvoni to make it big with his singing.

This wiki-style article brings you details on Melvoni regarding his personal and professional life.

Melvoni was born and raised in Flatbush, New York in 2003. Celebrating his birthday, he turned 16 years old in 2019.

His father was heavily involved in gang culture and life in the street. But he pushed Melvoni away from that life to do something worthwhile. Whereas, his mother made him promise to never involve in any gang.

He grew up in a Jamaican household with a very deep faith in Christianity. His grandmother frequently took him to church forcing him against his will, though he is deeply religious.

As for his ethnicity, he proudly hails of African-American descent with American Nationality.

As a young boy, Melvoni was more into drawing and dancing than singing as he told Genius. But he never thought about being an artist.

But as he kept growing and knowing the neighborhood he grew up in, the street lifestyle that almost enticed him to involve, inspired Melvoni to create music. He got into singing and writing extensively.

Melvoni’s vocal trajectory added with his reflection of the life he lived, gives a star quality to him.

Retro, one of his closest friends, was the one who knew and motivated him to sing. When he recorded his first song, his mom and dad, were surprised and happy after they heard it.

Melvoni’s moment of realization that he would make it big was when he met his manager. When he visited Los Angeles with Lil Tjay, he played his song to Lil Tjay’s manager who eventually ended up being Melvoni’s manager too.

Talking about music, Melvoni uploaded his first song Beautiful Girls on 8 September 2018 on YouTube. But his breakout song was Memories which was released on 14 March 2019. As of February 2020, the song has over 937K+ views on YouTube.

Melvoni’s No Man’s Land (2019) was the hottest and viral record which gained him major recognition and wide exposure. The video to the song was uploaded on YouTube on 21 June 2019. As of February 2020, the video has over 3.6 million views on the platform.

On 30 January 2020, Melvoni took it to his Instagram handle to announce he was dropping an EP soon. With his career taking a steep rise, we are expecting to look forward to more of his projects, EPs, and albums.

With his growing fanbase and discography, Melvoni is sure to see a steep rise in his $250k net worth.

Melvoni speaks through his music for sure, but his subtlety is causing fans trouble to know who he was dating before pursuing music.

On the song released in October 2018 titled No More You, he sang about a girl he was in a relationship with before. The video to the song had a picture of a call on his phone from Ashley with a little broken heart at the side.

Fans on the comment section assumed it was the name of the girl who he dated before.

On 8 February 2020, Melvoni released a song titled Friendzone. And as we know he only writes a song that’s relevant to him so with that being said, he has a girlfriend prospect trying to get to him after his success.

Beautiful Girls Friendzone Memories No Man's Land No More You