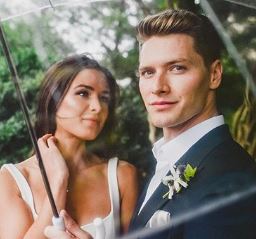 Ashley Welch is the wife of the IndyCar Series champion Josef Newgarden.

Continue reading and find out Ashley’s important wikis including her job, height, and parents. Furthermore, discover her age, birthday, and education.

Per famousbirthdays.com, Josef Newgarden turned 29 years of age in December 2019. Ashley Welch, meanwhile, was in her late-20s at the time.

Ashley Welch — who is of Caucasian descent — was born in Atlanta, Georgia. As such, she possessed an American passport.

Likewise, Ashley hailed from the family of four. Besides her, Ashley’s parents had a son.

Amongst the Welch siblings, Ashley was the younger. Her brother became a married man in January 2016.

For education, Ashley attended Georgia Perimeter College. However, nobody could tell for sure what was her major there.

Nonetheless, Ashley held the job title of a Disney Princess throughout her college days. What’s more, she worked at the Orlando, Flordia-based Disney World. Later, Ashley enjoyed a stint at Tokyo Disney.

Sadly, Ashley’s net worth eluded everybody.

A sweetheart at heart, Ashley Welch sported a brunette hairdo. Similarly, she stood around 5 feet 7 inches in height.

What Made Ashley Welch So Special?

Ashley Welch joined Instagram in 2012. By June 2020, she had garnered 4.7 thousand followers on the platform.

Via Instagram, Ashley shared his beliefs. Back in May 2019, she protested against pro-lifers sporting a shirt that read, “Not Your Body, Not Your Choice.”

A life long supporter of same-sex marriage, Ashley celebrated when it became legal in 2015.

In 2020, Ashley showed her support for the Black Lives Matter movement. Sharing a Benjamin Franklin quote, she wrote:

“If you’re more fortunate than others, build a bigger table. Not a higher fence.”

Running by her IG posts, Ashley and Josef went as far back as 2014. When she moved to Tokyo, they were still in a long-distance relationship.

Therefore, it only seemed right for Josef to pop the question in Japan. In 2018, he took a knee while on a trip to the country.

Ashley captioned the proposal photo with the words:

“It was coincidental seeing one of the most ancient gardens in Kyoto, because I’ll soon be the Newest Garden of them all. I never knew that I could love someone the way that I love you.”

In late-October 2019, Ashley and Josef tied the knot in an outdoor wedding. In the months that followed, she shared the photos from the day they became a married couple.